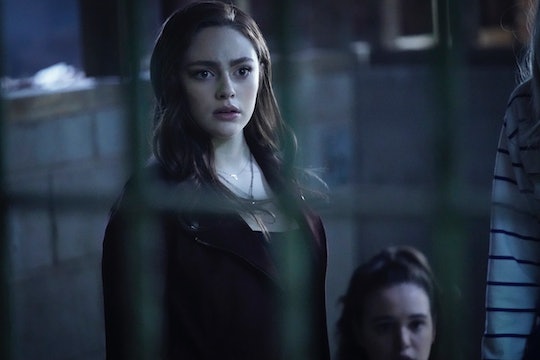 Hope's Future Is Looking Kind Of Grim On 'Legacies'

Believe it or not, Season 1 of Legacies is over, and the season finale left fans with more questions than answers. After finding out that Landon is the son of Malivore — a monster-eating mud gollum created by a triad of witches, werewolves, and vampires — Hope has a pretty ~wacky~ idea and tries to save the day. Fans are now left wondering: is Hope essentially dead on Legacies?

Spoilers for the season finale of Legacies ahead.

It’s hard to predict exactly what will happen on Season 2 of Legacies, but it’s safe to say that Hope is probably still alive after she jumped into the pit of Malivore. First of all, she’s a central character in the series, so I don’t think writers would kill her off so easily. Secondly, Hope is a tribrid — a vampire, witch, and werewolf all rolled into one — so her magic and healing powers would make it really hard for her to die. And lastly, Seylah established that people can jump into Malivore and come out alive, so it’s not far-fetched to think she’ll eventually make it back from the pit. How and when Hope comes back is still a mystery, but knowing how important she is to the Legacies story, fans can assume that she’s alive, probably kicking butt somewhere.

But for now, until she comes back, Hope’s as good as dead to her friends. When someone is consumed by (or jumps into) Malivore, their memory is wiped from the collective conscious of the world. So as far as the other characters on Legacies are concerned, Hope never existed. Seylah did the same thing when she jumped into Malivore. Her memory was wiped from Alaric and Landon’s minds, but because Hope is a tribrid, her memory of Seylah was unaffected.

Hope figured that because Malivore was created by the same supernatural DNA as her, she could jump in and defeat the monster. But before she makes the dive, Hope tells Alaric to burn all of her things and leaves him a note that explains things. Knowing Landon is a phoenix who will rise from the dead, Hope tells him that she loves him, and then kills him so he won’t stop her from sacrificing herself.

It feels like just when Hope learned to finally open herself up to love and friendship, she sacrifices everything to save her friends. In an interview with Entertainment Weekly, showrunner Julie Plec talked about Hope’s evolution this season, and the impact she’s had on her friends and the school. “The arc of the season for both Hope as an individual and all these kids as a group was to make her realize that she didn’t have to be in this alone and to open up her world to the realization that she has friends, and that all this burden that she’s been taking on herself for years can be lifted by sharing that burden across a group of people who are, in a lot of ways, just as special as she is,” said Plec. “We really wanted to get to the finale with Hope finally understanding, ‘Oh, I’m part of something. I’m not just the isolated girl alone in her room watching Cutthroat Kitchen anymore.’”

I’m sure Hope will reemerge at some point, probably with some new profound knowledge. But now that everyone has forgotten her, it will be interesting to see how she reintroduces herself to Landon and her friends next season.