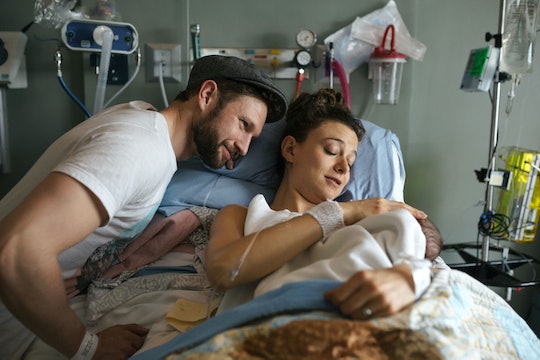 Is A C-Section With 8 Weeks Paid Leave Better Than A Vaginal Birth With 6 Weeks? Well...

My two daughters came into the world in radically different ways. One was born in the hospital by c-section, amidst wires and monitors and drugs. There was drama, there was rushing around, and there was the profound feeling that this was not how it was supposed to go. But while I recovered, the hospital staff did all the hard work. They helped me to rest and taught me to nurse and showed us what jaundice looked like and how to bathe a newborn. I got to rest and nurse and receive visitors and then we went home as a new family with eight weeks of paid disability and 12 weeks of family leave. My other daughter was born at home, in the bathtub, with no medical intervention at all. It was easy and beautiful and private, and once the midwife’s work was done, she and the doula left us to rest, taking a big bag of trash with them, but leaving us to sort out everything else — including now having two children — on our own, and because the birth was vaginal, we had less time off — only six weeks of disability — to do it all. Is it better to have a c-section or vaginal birth, taking into account the amount of leave you are given to recover? The answer is tricky.

In the end, neither was better from a mathematical perspective, but because of the circumstances, I felt as though I could have used twice as much time to recuperate from my vaginal delivery than my Caesarean one.

I decided to work until I went into labor or hit my due date, whichever came first.

At the time I had my babies, my workplace did not yet have a generous family leave policy and my state had not yet updated its family leave policies. With each child, I had 12 weeks of the promise that my job would be held for me (through the Family Medical Leave Act), but that was all. I had a good plan for disability coverage, but even that didn’t cover 100 percent of my pay. I remember being shocked, sitting in the HR office in my third trimester filling out the paperwork, learning that I would have to use all my preciously hoarded sick and vacation time to supplement the disability pay and receive 100 percent of my salary for the three months I was permitted to take off.

I decided to work until I went into labor or hit my due date, whichever came first. I would take the first half of the 12 weeks off and then return to work at half-time for the next 12 weeks, pushing my return to full-time work off back by another month and a half. I did that each time.

My first baby was born by c-section. I had not planned it that way and I was totally unprepared for it. The procedure was pitched to me, after five exhausting days of stop-and-start prodromal labor, multiple attempts to medically “get things going,” then being induced followed by hours of pushing but very little progress, as an emergency.

Perhaps by that point it was, but I think with better planning and care both on my part and my midwife’s part, it could have been avoided. The one bright spot was that the obstetrician who did the surgery, a kindhearted woman I’d never seen before the moment she delivered by baby and whose name I’ve long since forgotten, made her incision along a scar I already had from the kidney surgery I had when I was 4. My new incision healed quickly and almost painlessly, so the extra two weeks I got of disability felt like an extra two weeks of paid time off with my newborn. We used the time to bond. We walked for miles with her nestled into a Moby wrap on my chest. I sang to her. I nursed her. We ate well, nested well, and I healed quickly. It was an easy recovery that I barely even thought about. I was grateful for that because it meant I was able to devote that time to getting to know our baby.

Our second baby was born at home. We’d planned it that way, because I was healthy and so was my fetus, and my new midwife and I had determined that I probably could have had a home birth the first time too if things had been a little different. I was therefore looking at six weeks of disability instead of eight. Because even the high plan didn’t cover my full salary, once again I had to use my sick and vacation time to supplement even those covered days, and I didn’t have many to spare.

Bottom line: I needed more sick and vacation time. Because my children were close in age and I’d exhausted my saved days with my first parental leave, I’d had to be very careful about using even a single minute of time off since returning to work. I worked all through my pregnancy, right up to the day I delivered.

I soldiered on and on until I lost my mucus plug in the office bathroom and then started having very real contractions while I was interviewing a potential employee. I knew it was time to go home. But I remembered the extended laboring with my first baby and assumed we were in for another long ride. We queued up some Netflix, ordered takeout, put our young toddler to bed early, and settled in for a long weekend. I figured I had plenty of time to do the food shopping and house cleaning. We didn’t even bother to set up the birth pool because I didn’t want it taking up the entire living room floor for a minute longer than it had to. After a few hours of tracking time between contractions and watching back-to-back episodes of Breaking Bad, I got into the bathtub to relax as I had most evenings throughout my pregnancy. That’s when my labor kicked up a notch in a big way. I was starting to transition and the birth pool wasn’t set up, nothing was ready. My husband called the midwife and explained what was happening. I heard her shriek through the phone: there was no time for birth pools or anything else. She and the doula were on their way, but this baby was coming now and it seemed a very real possibility that my husband would be the one to deliver her.

Three hours later, the midwife and doula were gone and we were on our own. A healthy vaginal delivery (that was not just a VBAC but also an HBAC — a vaginal home birth after Caesarian) now under my belt, I was over the moon that I’d gotten the do-over birth I’d wanted, but I was completely spent and so was my husband. It was 5:30 in the morning and our toddler had slept through it all. She was just waking up, meeting her sister, raring and ready to go. We’d been up 24 hours. We had no postpartum doula and we’d learned from experience that having family members there to help with a newborn was not quite as helpful as we’d hoped. We were alone. We felt like zombies, the apartment was a mess, we had nothing to eat, and our other child was rested and ready for the day. I was feeling faint. My husband propped me up on the couch with the baby and ran to the corner deli. He came back with a jar of peanut butter and a package of Oreos, which I ate together. We then begged a neighbor to take our toddler so we could nap with our newborn.

Even knowing that the math behind my parental leave situation worked in such a way that eight weeks was not actually more than six weeks, this recovery period felt different and shorter right from the start. While I was overjoyed at having had our daughter at home, I hadn’t realized how much more work it was going to be. At home, there were no doctors to tell me I was just tired and dehydrated, no nurses to help us find our latch, no staff to bring meals or change bedding, no one to pronounce us all ready to be discharged and to begin our lives together. From the moment the midwife let herself out of the apartment, life was already underway. The baby wasn’t more than an hour old then, and we were a total mess. A happy, triumphant mess, maybe, but still a mess, and it took us every minute of those six weeks to adjust to being a family of four.