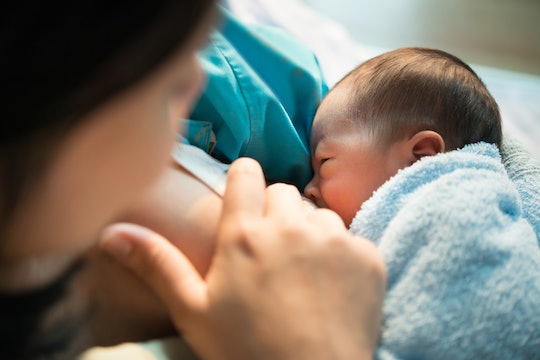 Here's The Deal With Irregular Periods When You're Breastfeeding

Pregnancy causes morning sickness, body hair, weird taste buds and more, but it also has some perks. Think: no periods. If you're breastfeeding, you might get to prolong that no-period phase even longer, but is it normal to have absent or irregular periods while breastfeeding? Women’s health experts say it varies from person to person, but it’s generally not cause for concern.

“Breastfeeding often has a significant impact on menstruation, but how it impacts people varies widely from person to person, and can also change over time as your nursing relationship changes," Megan Davidson, Ph.D., doula and author Your Birth Plan: A Guide to Navigating All of Your Choices in Childbirth tells Romper. In her experience working with postpartum moms, she's learned that the time it takes for a period to return can be different for everybody.

“For most people, their period will return within a couple months of giving birth if they are not lactating, but the hormonal changes required to support breastfeeding can significantly alter this timeline. I’ve worked with people who have resumed menstruation within this same two-month window even while breastfeeding, and I’ve worked with others who have not gotten a period for the entirety of the time they lactated, potentially a year or more,” she says.

And it’s those hormones — no, the hormone changes don’t end after birth — that can cause irregular periods short-term or indefinitely while breastfeeding. Kendra Gillespie, M.D., OB-GYN at River City OB-GYN and Baptist Health in Jacksonville, Florida, tells Romper that the hormones associated with breastfeeding are also involved in making your period *a thing.*

“Yes, it is normal to have irregular periods while breastfeeding,” says Gillespie. “Most women will resume a normal cycle approximately six months after delivery; however, it can be irregular for up to a year and still be considered normal. Breastfeeding is the result of complex hormonal interactions. One of the hormones that is elevated during breastfeeding, prolactin, also impacts another hormone, GnRH, that contributes to regulating your period. Because of the elevated levels, the normal interplay is altered and periods can become irregular.”

However, while breastfeeding can suppress menstruation, it doesn’t suppress pregnancy. Breastfeeding your baby does not equal birth control, say the experts.

“It is important to note that even though breastfeeding can suppress your fertility, it should not be considered an effective form of birth control. Many people get pregnant while lactating,” Davidson says.

“The period irregularity is representative of irregular ovulation because of the hormones,” Gillespie adds. “You can still ovulate, but at unpredictable times. Therefore, methods like the Lactational Amenorrhea Method or Fertility Awareness Method are difficult to implement because many women will still have periods, though irregular.”

Gillespie adds that choosing a birth control with your doctor is important. Don’t be afraid to express concerns about hormonal methods, or opt for hormonal birth controls if you know they’re right for you.

“All hormonal contraceptive methods are safe to use during breastfeeding when started at the appropriate time, and discussed with your doctor. There are studies which show that methods containing estrogen could decrease milk letdown, but other studies have challenged that theory and encourage use of whichever method the patient prefers. However, if there are mothers who are concerned about this, progestin-only methods are just as effective,” she says.

If your period hasn’t returned yet and you’re concerned, reach out to your obstetrician. And while your period’s timing may be irregular for a while, Gillespie recommends keeping an eye out for one other change, and be sure to call your doctor if you notice it.

“The most concerning irregularity with bleeding is heavy bleeding, quantified as changing a full pad every 30 minutes for more than 2 hours, but practically any amount deemed heavy by the patient. Heavy bleeding more than six to eight weeks after pregnancy can be a sign of other abnormal findings such as retained placenta, infection, problem with blood vessels, or cancer, and should be addressed in person with a doctor.”

Megan Davidson, PhD, doula and author Your Birth Plan: A Guide to Navigating All of Your Choices in Childbirth