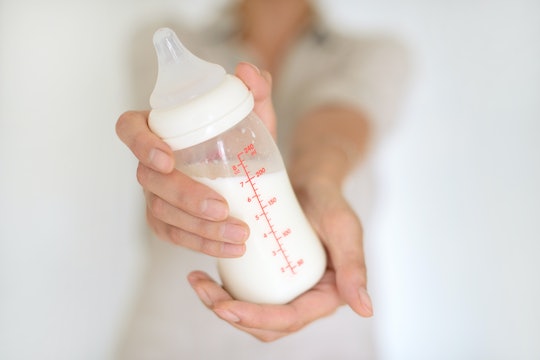 Man, aren't the soothing qualities of the bottle for your baby pretty awesome? Not only does your baby enjoy their favorite bottle, but a bottle feeding can also indicate that it’s bedtime and be used as a soothing mechanism. (Plus it’s a good way to ensure they’re getting all those last-minute nutrients and calories before bed.) It makes sense that you're not ready to take it away, but when should the bottle stop? If you're wondering, is it OK that my baby is 12 months and still taking a bottle, you're not alone.

According to pediatrician Jarret Patton, as a parent, it should be your goal to stop giving your baby a bottle by the time they’re 12 months of age, and start transitioning them to a sippy cup when they’re around 9 months. “The cups should have a hard top on them, not the soft tops that mimic bottles," he tells Romper.

"Although solid foods can be safely introduced between 4 and 6 months of age, the main source of nutrition early on is breast milk or formula. By the time you transition off the bottle, solid foods comprise the bulk of your baby's nourishment,” Patton says.

According to Baby Center, even by 9 months, bottle feeding isn’t necessary. Bradley Bradford, a pediatrician in Delray Beach, Florida, said in an interview with Baby Center that babies are good at self-regulating their feedings, and they’ll “tell” you when they’re done for the day and don’t need that bottle before bedtime by turning their heads and not finishing it.

Every baby is different, and as a parent, you know your baby best. And if your baby was premature or has other health considerations, you should consider talking to your pediatrician about them continuing the bottle. Perhaps spinning an Enya CD at bedtime can help soothe them (and you) instead of their nighttime bottle?