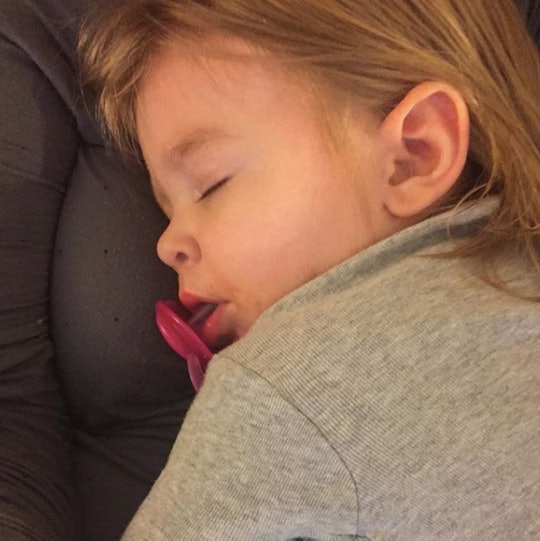 As a parent, there are many things you do to help save your sanity. Sometimes you relinquish strict screen time rules and let them watch the darn show if it means the whining will OMGpleasestop. Bedtimes bend for special occasions, and sometimes there are three lollipops after you said, "only one." Infants don't exactly require bargaining, but it's the little things that help keep your head on straight, like pacifiers. But as your child gets older, you may begin to worry about extended use, like, is it OK that my baby is 18 months and still taking a pacifier?

“Pacifier use is an often debated topic,” says Texas-based Dr. Eboni Hollier, who is board-certified in both general and developmental and behavioral pediatrics, in a Romper email interview. “Most parents use a pacifier at some point in their child’s life. Sucking is a natural responsive behavior in infants and young toddlers — many children soothe themselves with this way.”

Hollier says in general, the earlier you wean your little one from a pacifier, the easier it will be. She says most children stop using the pacifier on their own between 2 to 4 years of age, but some require help. “The older your child gets, it can be much more difficult to wean from the pacifier as he may have become greatly attached to it and may depend on it to calm himself and/or to fall asleep,” Hollier says.

The American Academy of Pediatrics (AAP) recommends pacifier use for naps and at bedtime to decrease the risk of Sudden Infant Death Syndrome (SIDS) until the child is 1 year old, but prolonged pacifier use has been associated with increased ear infections, affected speech development, and misaligned teeth. Hollier says extended use has even been associated with affecting the shape of a child’s mouth and jaw, which may affect the positioning of permanent teeth.

Because of the difficulty attached to weaning an older child off a pacifier, Hollier recommends discontinuing use by the child’s first birthday. “After this time, it can be quite distressing to both the child and parents to discontinue pacifier use.”

She does emphasize, however, that most issues related to a pacifier arise only if use continues past the child’s second birthday, and are unlikely to be long-term problems if pacifier use is discontinued before your child’s permanent teeth erupt, beginning around 6 years of age.

“If your child is still using a pacifier [at an older age], you can still help him wean from it,” Hollier says. “And you should not feel like a bad parent because your child still uses a pacifier.”

A little easing of mom-guilt does wonders for your soul, am I right?