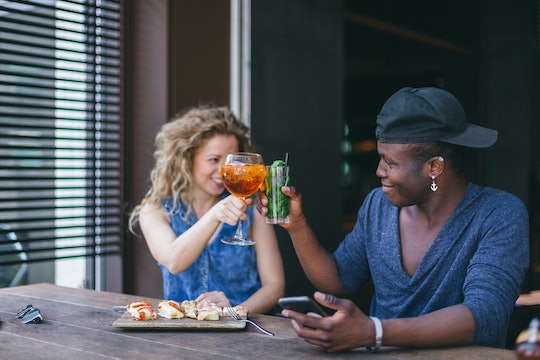 Is It OK To Drink Alcohol When TTC?

When you're trying to conceive, anything that helps you relax suddenly seems mandatory — baby making is stressful business. You're always tracking something, examining mucus like a Nancy Drew vagina detective, and you just want to take the edge off. But is it OK to drink alcohol when you're trying to get pregnant, or should you find another vice?

It's a loaded question. On one hand, you're already trying everything you can to not only get pregnant, but to also ensure that your baby will be healthy. You've started taking vitamins that double as horse pills and smell of fish, you're exercising every day, you're having all the sex, and you're trying to relax and bring this baby into the most ideal environment possible. But, again, the stress is weighing you down. At the end of a long night of choking on pills and sheet dancing, you'd like some chardonnay, but not at the risk of harming your potential fetus, and you certainly don't want it to affect your chances of getting pregnant to begin with.

Thankfully, it shouldn't impair your ability to get pregnant, found a Danish study cited by The New York Times. The study found that moderate drinking did not adversely affect fertility in any measurable amount, but that heavy drinking may. And that's not just for the mother to worry about. Another study, this one in the Journal of Reproductive Sciences, noted that men who are heavy drinkers experience lower sperm quality, morphology, and speed to their swimmers because of how the alcohol negatively impacts their hormones. It also found that heavy drinking in women, which is upwards of seven drinks a week, begin to see a drop in their fertility. But what about the safety?

Recent controversy over the Centers for Disease Control and Prevention's (CDC) declaration that essentially any woman with a functioning reproductive system who isn't on hormonal birth control should cease drinking entirely, has brought this question to the forefront of many trying to conceive message boards. But is it that big of a deal or that dangerous? Or, is it OK to drink alcohol when you're trying to get pregnant?

Recent research may counter that dire warning. An article on the Harvard University Blog suggested that a little bit of alcohol when trying to conceive or early in pregnancy might not be as awful as the CDC would have you believe. The article stated that the effects of light drinking, or three to seven drinks per week, were mostly negligible. While it's not an endorsement of drinking while trying to get pregnant, it's at least a bit of a balm on the worried moms who got unexpectedly pregnant and hadn't changed their habits.

The American College of Obstetrics and Gynecology, on the other hand, noted that women should absolutely avoid alcohol while trying to get pregnant because the risks are simply too great for the developing fetus. They don't quite echo the boozy blast issued by the CDC, but it still feels pretty final.

Regardless of the Harvard article, I don't think there's ever going to be more research than that, because no one will do this as a controlled study — it would go against all sorts of ethical rules to complete. The researchers would have to direct women to drink during early pregnancy, in varying amounts over varying periods of time, with many, many mothers, knowing it could essentially deform the developing fetus. The Food and Drug Administration and scientists with a conscience would never allow it, nor would mothers. All they have now are statistical self-reported studies, which paint a pretty terrifying picture of miscarriage, fetal alcohol syndrome, developmental disability, and low birth weight. Knowing this, it's probably best to go with the majority and hold off on the vodka tonic, for now. As always, though, this is between your provider and you to decide.