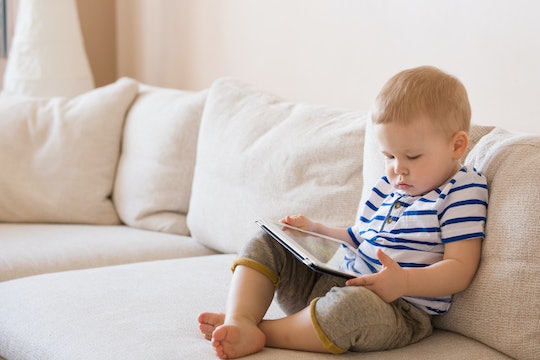 How Your Toddler Holding An iPad Against Their Stomach Affects Them

Radiofrequency radiation is certainly something society has started to research even more as technology becomes more prevalent and advanced. Most people are fortunate enough to have access to some sort of technology, whether it’s a smartphone, a tablet, or a computer — it’s pretty inescapable. So as you’re watching your toddler screaming through the house with your iPad, other than the risk of your expensive tablet falling to the ground and shattering, you may be concerned about something else like, is it safe for my toddler to hold an iPad against their stomach?

As far as any radiation that the body may be exposed to while holding a tablet against a stomach, Dr. Faisal Abdul Karim Malim tells Romper that per previous studies, there is no correlation between exposure of tablets or mobile devices to the human body and the amount of radiation to which the body is exposed. "However, there may be production of excess heat at the point of contact with the skin of the infant," he adds.

Pediatrician Jarret Patton agrees, and says the only thing you have to worry about is the tablet overheating and burning the skin. "Without proper ventilation, the unit could theoretically overheat and cause a burn on the skin," Patton says in an email interview with Romper. "The real danger of tablets to toddlers regards the introduction of screen time prior to 2 years old."

What are the dangers if tablets are used before toddlers are 2 years old? The American Academy of Pediatrics (AAP) suggested children 18 months and younger should not be exposed to digital media at all.

According to an article by Dr. Ginny Sugimoto about screen time and infants on Kaiser Permanente’s website, "The AAP says the noise and visuals are distracting and sometimes distressing to infants."

Sugimoto wrote that the AAP also believes using screens is not recommended at this age because, "infants are engaged in rapid brain development, and much of that work happens during interactions between children and parents or other caregivers." Growing infants need real face-to-face interaction, as well as "hands-on learning and exploration" without the use of screens, and you can do this by reading them books and simply speaking to them and making eye contact, the article suggested.

The article also noted that recent studies have shown children who used media for educational purposes may have poorer language skills than those who didn’t use any sort of media.

Patton adds, "Children should be interacting with people and physical toys such as books, blocks, and dolls, because these toys, coupled with human interaction, stimulate both physical development by learning to use their hands, and their mental development by using their brain to solve problems and be creative. Video games and movies are very passive in nature and do not provide these same developmental benefits."

If your toddler is hauling your iPad around, according to these particular doctors, the only thing you have to worry about are potential burns from the tablet overheating because of lack of ventilation. (And there is the possibility of your screen shattering from your toddler dropping it on the floor.) Always check with a pediatrician you trust if you have other worries about radiation and iPads, as there are a lot of differing arguments out there.

If you’re worried about how screen time may affect your children down the road, you can always wait until they are at least 2 years old, then you both can enjoy watching Sesame Street together. But let’s be honest, if the iPad is going to let you pee in peace, at least you know it won't negatively affect your kid's stomach as they hold it in bed.