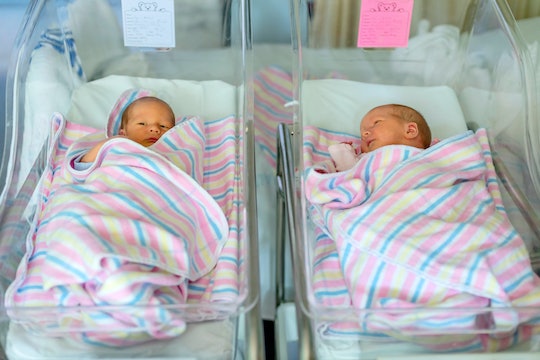 Is It Safe If Twins Are Born On Different Days? Experts Explain

You’ve probably heard of twins born on different days because the clock struck midnight during their delivery. But did you know twins can be born multiple days apart, or even in different weeks? Parents expecting multiples may be wondering if it’s safe for twins to be born on different days, and whether this will be their experience. Experts say it’s not just a rare medical mystery in news headlines, but a special technique they use if one baby is born early.

There’s not much data on how often twins are born days, or even weeks, apart, but experts say it does happen. If a mom-to-be goes into labor early for any reason and the first baby is delivered, doctors may try to keep the second one in utero so it can continue developing.

“If you deal with multiple births you want both babies to get to term, but sometimes you do what’s known as an interval birth,” says Victor R. Klein, M.D., board-certified OB-GYN at Northwell Health and vice chairman of Obstetrics & Gynecology at North Shore University Hospital, in an interview with Romper. “Let’s say the mother is pregnant with twins and breaks her water, and has baby A on the bottom and goes into labor. Sometimes these babies can be delivered, clamp the umbilical cord, and keep the other baby in utero as long as possible.”

Reports on interval birth have found that the best candidates are moms who are giving birth before 24 weeks, and that interval birth isn’t usually recommended for women 28 weeks along or more.

“If you have more time in utero with the baby, they usually do a lot better. If I can get another two to three weeks out of a baby, terrific,” Klein says. “If you’re 25 weeks, that’s a very premature kid, and those physicians may have a discussion of informed consent with the parents of the baby that there’s a risk if we wait, there’s a benefit if we wait, and it’s hard to quantify.”

How far along a mom is in her pregnancy is the main deciding factor in whether she and her babies would benefit from an interval birth. Klein says it’s extremely important for parents to know the risks and benefits of this process, because it’s not 100% safe.

“There is a risk, and that’s infection to the mother as well as to the baby [still in utero],” he says. “If you have preterm birth and the mother breaks her water, she has increased risk of infection going up the birth canal and into the uterus, infecting the other baby as well as the uterus. It’s called an ascending infection of the birth canal. When you hit the third trimester, risks outweigh the benefits at that point.”

Someone pregnant with multiples may be more likely to have their babies born days (or weeks) apart if they’ve had early deliveries in the past, or if something breaks their water.

“It can be just a small, not well-constructed membrane from infection, or a spontaneous rupture after some sort of irritant-like bacteria,” says Adriann Combs, DNP, board-certified neonatal nurse practitioner and clinical director of Obstetrics and Gynecology at Northwell Health, in an interview with Romper. “Previous preterm delivery puts you at risk for preterm delivery again. You want to be sure, if you’re having twins, you’re going to a doctor familiar with managing twins, which will probably involve some monitoring to ensure the cervix isn’t thinning out.”

Combs says that interval births used to happen more often when fertility treatments, like intrauterine insemination (IUI) and in vitro fertilization (IVF), often led to higher numbers of pregnancies with twins, triplets, or more. But even now, parents pregnant with multiples should seek out a specialist for their prenatal care and select where to give birth carefully.

“If a family is having twins and she’s any risk whatsoever, she should see a maternal/fetal medicine physician trained to manage multiple pregnancies. They need to be cared for in level III maternal services and level IV NICUs," Combs says.