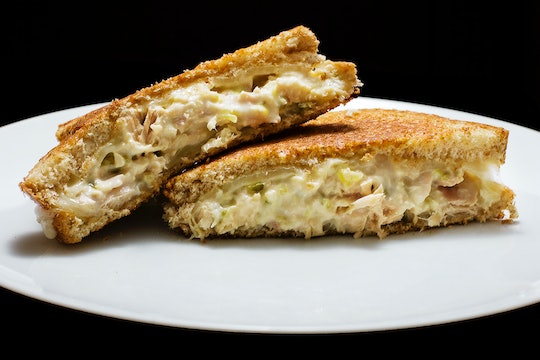 Is It Safe To Buy Bumble Bee Tuna? The Recall Is Scaring Hungry Shoppers

Last week was a rough one for fans of canned fish. It all started when Bumble Bee issued a voluntary recall on its Chunk Light Tuna (the only way to eat tuna; go to hell, albacore!). Chicken of the Sea soon followed with its own recall, which was no doubt a harrowing experience for Jessica Simpson, who I assume went immediately to her freezer upon hearing the news, and discarded everything. Then, grocery chain H-E-B recalled its Hill Country Fare brand tuna. It's been a week, so is it safe to buy Bumble Bee tuna now? Cheap lunch fans, rejoice, because everything is finally back to normal.

The original Bumble Bee recall was due to a glitch in the sterilization process, which Bumble Bee said "could result in contamination by spoilage organisms or pathogens," which is a fancy lawyer-speak way to say that although the fish normally lasts three years in a can (whoa), the affected product could potentially go bad a lot sooner. No illnesses were ever reported, and the recall was completely voluntary. It turned out that the fish was processed in a facility that's utilized by multiple manufacturers, and Chicken of the Sea issued its own recall later that day. H-E-B issued its recall two days later, which is rather worrisome.

So now that the problem has been caught, are we safe? Bumble Bee's recall states that the affected products were distributed nationwide, but they're "working closely with the co-packer and the FDA to expedite the removal of products from commerce." And Shue Wing Chan, president of Tri-Union Seafoods, which manufactures Chicken of the Sea, said, "As soon as we discovered the issue, we took immediate steps to initiate this voluntary recall, alerting our retail customers that received the product and instructing them to remove it from store shelves." H-E-B, though late to the game, is a retailer, so we can assume its shelves are also now pathogen-free.

So, those with bare cupboards should feel free to go and stock up. Heck, there might even be a sale on tuna because everyone's afraid of it right now. Go ahead and fill that cart; it'll last for three years (still can't get over that). Put it on a saltine. Mix it with peas and noodles and cream of mushroom soup and bake it. Add some mayo and garlic powder and fry it up on an English muffin with cheese. And then bring it all to me because now I've made myself hungry.