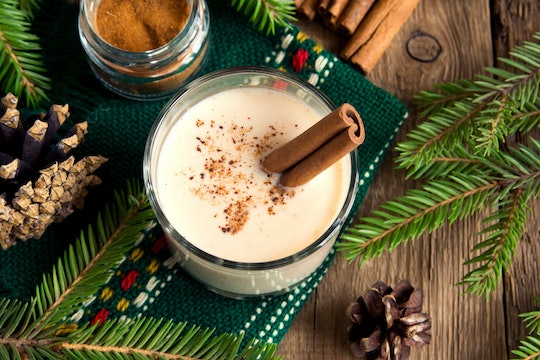 Is It Safe To Drink Eggnog While Pregnant?

If you're pregnant during the holidays, chances are you'll be donning your holiday maternity best and dashing from one Christmas party to the next. But before you take advantage of the plethora of amazing snacks and drinks, it's a good idea to double check that it's all safe for both you and your growing baby. Take eggnog for example. It's a holiday party staple, but is it safe to drink eggnog while pregnant? Yes and no.

Obviously the first thing to determine is whether or not it's alcoholic eggnog, since according to the March of Dimes, alcohol use during pregnancy has been proven harmful to unborn babies and it's not known exactly how much is "too" much. So if the nog has been spiked, it's a definite "no."

However, there is a bit more grey area if it's non-alcoholic eggnog. According to Baby Center, many homemade eggnog recipes use raw, under-cooked, or unpasteurized eggs. These eggs are unsafe for pregnant women because they can potentially carry and transmit the Salmonella bacteria. According to the U.S. Department of Health & Human Services, contracting salmonella during pregnancy usually leads to dehydration, bacteria in the blood, diarrhea, and fever and can pass on to the baby as well.

One study published in the National Institutes of Health claimed that, although salmonella is admittedly decreasing in frequency, more often than not, dishes that are homemade will be made with unpasteurized eggs and pregnant women are especially at risk because of their already compromised immune systems. Foods like homemade salad dressings, mayonnaise, and ice cream are also at risk. So, if the eggnog is homemade, you may want to steer clear, no matter how tempting it looks.

On the other hand, the American Pregnancy Association noted that most commercial brands of eggnog are required to use pasteurized eggs, cutting out the risk for Salmonella bacteria. So if your eggnog is store bought or made at a restaurant, you're safe to drink up.