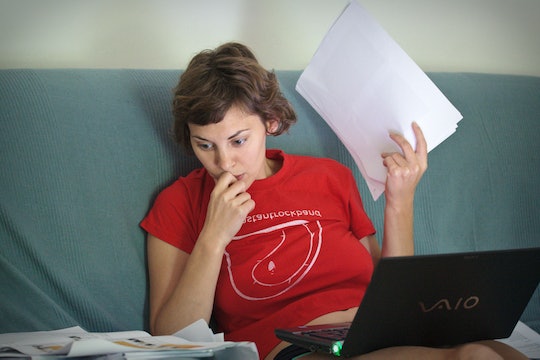 Is It Safe To Have A Laptop On Your Stomach When Pregnant? 5 Ways To Be Tech-Savvy & Baby Safe

Technology is a pretty wonderful invention, especially when pregnant. What other modern convenience makes it possible for you to design your baby’s nursery and browse the best names from your phone? Technology is everywhere and it makes finding out if that tuna sandwich you ate yesterday was safe for your wombmate easy. But are all electronic devices safe to use when expecting? Is it safe to have a laptop on your belly while pregnant and browsing Pinterest for nursery ideas?

Northwestern University notes that the biggest concern when it comes to using technology while pregnant is electromagnetic radiation, an energy transmitted in waves or particles and found virtually everywhere. Any technology releasing these waves, such as a microwave or a cellphone, can cause a tiny amount of the radiation to enter someone’s body. If the quantity is high enough, electromagnetic radio waves can damage DNA and affect molecules inside of a living thing. With the Pew Research Center reporting that 64 percent of American adults own some kind of smartphone and 84 percent of American households have a computer, it’s no wonder we worry about our unborn babies and if this radiation will have an effect on them.

Science hasn’t been able to address these fears, mainly because no one wants to put an unborn baby and its mother at risk to see any possible effects. But the general consensus is that technology is safe. Your laptop, for instance, is absolutely fine to use while pregnant. But maybe avoid putting in right on your baby bump. What to Expect recommends holding it on your lap, rather than your stomach, to help with balance and to prevent any potential discomfort. Although some research has determined that the heat from a laptop can affect a man’s fertility, there is no study that proves the heat can affect a growing fetus.

And your cellphone? Use it as you normally would. What to Expect says that there is not enough research or evidence to show that using a cellphone is damaging to your baby. Oh, and your microwave popcorn is safe, too. With the FDA regulations of appliances, it’s fair to assume that your baby is safe from any waves emitted from your microwave. Some pregnant women worry about traveling, especially through airports. TSA says that their full body scanners do not use x-rays and are safe for anyone to walk through.

If you’re still nervous, just remember that you’re probably getting ultrasounds during your pregnancy, and they use high frequency sound waves to capture an image of your sweet babe. The American Pregnancy Association says that when done correctly, ultrasounds and sonograms pose no threat to you or your baby. But if the thought of all these electromagnetic waves and radiation has you worried your baby will turn into Superman (Come on, that could be kind of cool), here are five tips to keep your baby extra-safe from technology’s effects.

More Like This
How To Fly Safely During Pregnancy
Is It Safe To Pump While Pregnant? Experts Weigh In
Here's What Pregnant People Actually Want For Valentine's Day
What Foods Fight Nausea During Pregnancy?
What Parents Are Talking About — Delivered Straight To Your Inbox