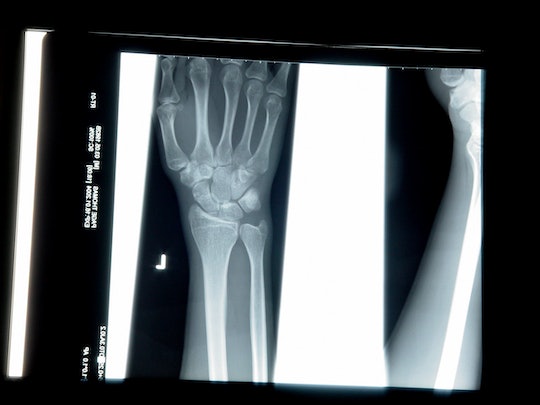 Is It Safe To Have X-Rays While Breastfeeding? What To Know About Getting Screened While Nursing

You’re constantly worried about the safety of your baby while you’re pregnant, but the list of dos and don’ts doesn’t end once you’re postpartum, especially if you’re breastfeeding. Once my daughter had the hang of nursing, I worried constantly that something would mess up my milk or affect her. Spicy food? Pass. Beer? No thanks. I became a bit obsessed with making sure my breast milk wasn’t affected by anything and found myself doing a lot of research like wondering if it’s safe to eat seafood while nursing and is it safe to have X-rays while breastfeeding.

Well, don’t cancel that dentist appointment yet (I know, sorry about that.) It turns out all X-rays are safe while nursing and have no effect on your breast milk, according to Breastfeeding Support. Now, that’s not to say your milk won’t be affected. As Pediatrician Natasha Burgert noted on BabyCenter X-ray radiation can kill off a few living cells in your breast milk, but your baby won’t be exposed to the rays. She also noted that some screenings may require more caution. Burgert wrote that if you undergo an X-ray that requires the injection of radioactive isotopes, such as a marrow or bone scan, you may have to wait to resume breastfeeding.

Your breast milk and nursing babe are also safe even if your X-ray includes contrast dyes to help with imaging or barium. The Academy of American Pediatrics writes that when using iodinated contrast or gadolinium, about 0.04 perfect of the intravenous dose reaches human milk. That being said, less than 2 percent is actually absorbed by the infant, making it safe to nurse following a procedure.

Of course, if you feel more comfortable holding off on non-urgent screenings till you’re done nursing that’s more than OK. Just know your dentist probably won’t buy the breastfeeding excuse when you try to get out of your yearly appointment. Again, sorry about that.