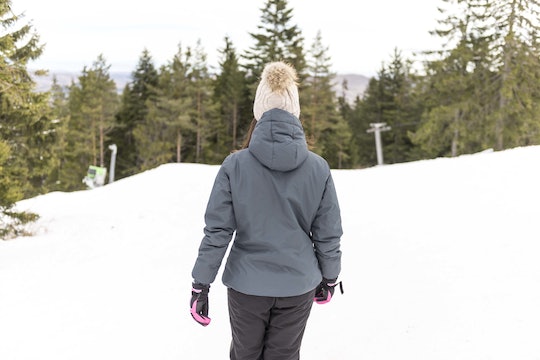 Here's What Pregnant Women *Must* Be Aware Of Before They Ski

With the Olympics just around the corner, winter sports are on everybody's minds. There's nothing like watching top athletes scoring big on the slopes to make even amateur enthusiasts consider packing up their poles and hitting the powder. But what if you're expecting? Is it safe to ski when you're pregnant, or are you better off staying behind at the lodge with a mug of hot cocoa?

As you're probably aware, exercise in general usually gets the green light for moms-to-be. In fact, assuming your pregnancy is a healthy one and there are no underlying complications, the American College of Obstetricians and Gynecologists recommends regular exercise for everything from easing back pain to reducing your chances of developing gestational diabetes. Of course, "exercise" is a relative term —there's a pretty big difference between taking a brisk walk around the block and hurling yourself down a mountain at breakneck speed. So when it comes to the question of whether or not you can safely ski during pregnancy, the answer isn't a simple one, as it turns out. There are multiple factors to consider, including how far along you are in your pregnancy and whether or not you're an experienced skier. (This makes sense, of course, considering the fact that skiing is probably more dangerous for novices in general, whether they're expecting or not.)

The potential problem with skiing is that it's a "high-impact" sport, which is a sport with a "heightened risk of collision or falling," as OB-GYN Michele Hakakha said in Parents.

Taking a tumble might not be such a huge deal in the first trimester, an article in Fit Pregnancy explains, but falling on your abdomen gets a lot riskier after 20 weeks when the uterus extends past the pelvis (a bad spill could even cause fetal injury, separation of the placenta from the baby, or premature labor).

And not only are injuries more of a concern when you're pregnant, but the state of your ever-changing body could make you more likely to get injured in the first place, as OB-GYN Mary Polan points out on BabyCenter.

"As you get further along in your pregnancy, your sense of balance diminishes and your weight is distributed differently," she said. "So things that require good balance, like skiing, will be more difficult as you head into the third trimester."

Well, sure — this should come as no surprise to any woman who's ever tried to, say, get up off the couch in the weeks leading up to her due date. The average woman's mobility does seem to decrease with the size of her bump; that could be one reason why, even though there have been pregnant athletes who competed in the Olympics (such as snowboarder Amelie Kober, who was two months pregnant when she competed in 2010 Vancouver Games, according to Spliter), most of them were in the early phases of gestation.

"In certain women (particularly those who have been doing one of these sports prior to conceiving), a green light from your OB may be given in the first and early second trimesters, so it's always best to check with whomever is taking care of you during pregnancy," said Hakakha.

Bear in mind, if your doctor leans toward the "better safe than sorry" end of the spectrum, you might be told to skip this particular pastime altogether. After all, the American Pregnancy Association flat-out states on their website that due to significant risk of injuries, both "water and snow skiing are not recommended during pregnancy."

It might not be the answer you're looking for, but there are worse things than curling up in front of the fire while the rest of your family freezes. Or if you really want to join in the fun, you could always follow (also pregnant) Kate Middleton's lead and watch from the sidelines wearing a super cute ski jacket:

You can always go for the gold next year! In the meantime, take it easy.