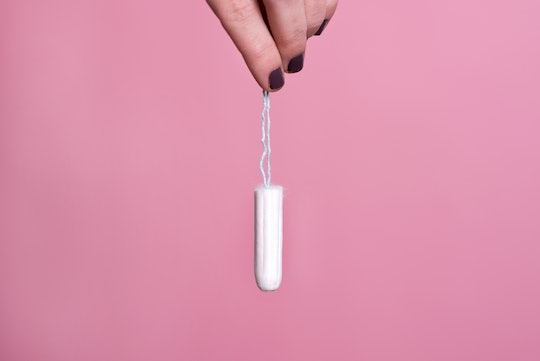 No, You Really Can't Use Tampons During Pregnancy & Here's Why

I've known many women who become pregnant unexpectedly, and they're genuinely surprised when they find out. If these women are anything like me, a planner, they might have noticed a shift in discharge or spotting, like that of an oncoming period, and prepared by using a pad or tampon. But what if that shift wasn't your period, but a pregnancy? Could the tampons have hurt it? Is it safe to use a tampon during pregnancy?

Some type of bleeding or spotting occurs in up to 9 percent of all pregnancies according to a study published in Human Reproduction. While it is a cause for concern, if the bleeding is light and fills less than two pads per day, the assumption is that it's normal and can result in a live birth. However, because tampons carry an inherent increased risk for vaginal infection which may compromise the pregnancy, it's best to steer clear of them. Although, if you used them before knowing you were pregnant, it's highly likely that it's fine, according to midwife Samantha Smith of Edinburgh. She tells Romper that many women use tampons before they find out for sure if they're pregnant, and in that case, "It's not a huge worry. It's not like taking a potentially toxic medication — it's cotton."

Smith tells Romper that the main concern with tampons is the increased risk for bacteria near the cervix. While the cervix is pretty good at blocking harmful bacteria from reaching the placental home of your baby, it's not a perfect mechanism. Also, Smith adds, "It's hard to determine just how much you're bleeding if you can't see it. That's not something you want to be a mystery." It's really stressful — I get it. I spotted with my first pregnancy, and I was terrified, but it's really not time to put your head in the sand, much as it may be comforting. "Pads and pantyliners allow you to see what's happening in real time," Smith says, and they allow you to communicate this accurately with your provider.

Other than spotting, your vagina may also be experiencing an increase in vaginal discharge while you're pregnant. According to the American Pregnancy Association, this is very common, but you should still avoid tampons because of the risk of potential germs. Just like with spotting, you should use pantyliners or pads if the discharge bothers you.

If you were using tampons without knowing that you were pregnant, Smith notes that unless you developed a pelvic infection or toxic shock syndrome, you needn't worry. "First of all, it doesn't help affairs to be worrying on about something that's already done, and secondly, it's by no means a huge risk factor for damage in early pregnancy."

I know that I am both a planner and a worrier, so I might be that mom who has used tampons before she found out she was pregnant, and the mom Googling furiously to see if I did anything to damage my unborn child beyond the possibility that the baby might end up with my unruly hair or slightly knobby knees.

It's a comfort to know that there's not really a risk for lasting damage from my preparedness. Often, my neuroses get the better of me in these situations, and I spend hours worrying overmuch about what I've done. Smith says that this sort of worrying is de rigueur in pregnancy. It's far less common to see a mother who doesn't worry the details, including, but not limited to worrying about safe tampon use during pregnancy.