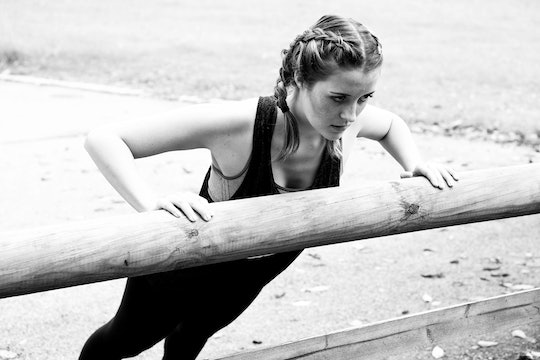 Why You Should Never Wear A Thong When Exercising

Exercising is about getting fit and feeling better, but there will always be a part of me that worries about how I look during a work out. I can't help but to compare my workout gear to what the other women at the gym are sporting. I just can't bring myself to pull the trigger on $100 leggings with thongs underneath. I'll always be a discount yoga pant, full-bottom brief kind of girl. Any time I see ladies at the gym without visible panty lines I wonder, is it safe to wear a thong when you're working out?

In an interview with Elle.com, Dr. Nicole E. Williams of the Gynecology Institute of Chicago said the answer is a flat out "no." "Wearing a thong during exercise can bring E.coli living in the rear toward the front as you move, increasing your risk for urinary tract infection," Williams said.

The experts from Columbia University's Go Ask Alice advice column agree with Williams, noting that a thong can easily pick up fecal matter and bacteria from the anus and carry that matter forward to the vagina increasing your risk for vaginitis. Additionally, the thong itself may irritate vaginal tissue by causing micro-abrasions or cracks in the skin, leaving the tissues more susceptible to infection.

Another concern gynecologists have about thong underwear is that they are often made of non-breathable fabrics such as silk or lace which can trap moisture and create the perfect environment for yeast. The risk is greater after you've been sweating at the gym. No matter what type of underwear you choose, it should always be all cotton. Don't be fooled silky briefs with a cotton crotch. If the layer outside of the crotch is not breathable, you're in the same boat.

Even if you aren't one of the many women predisposed to vaginal or urinary infections, once the balance of your vaginal environment – including the moisture levels from vaginal secretions – is thrown off, your system can be thrown out of whack for months, or longer. In an interview with The Huffington Post, OB-GYN Dr. Shieva Ghofrany called it the “vicious cycle of thong use.” She explained that bacteria causes increased vaginal discharge, the increase in discharge leads to the increased use of panty liners, which traps even more moisture, leading to more infections, and more discharge. Anyone who has ever battled recurring infections will agree that it's easier to prevent them than to get rid of them for good.

A lesser known concern with thong use at the gym is the increased risk for skin tags on your vulva and near your rectum. According to Ghofrany, these small piles of soft tissue occur from the skin being constantly rubbed in the same spot. They are most commonly found along the neck, armpits, and bra line, but doctors are seeing them more often in the vulvar and rectal areas of women who wear thongs. Skin tags are not dangerous, but they can be uncomfortable and unattractive. Women's Health noted that skin tags in sensitive areas can be removed by a dermatologist who will either cut, freeze, or cauterize them.

Another reason to up the thongs for good — hemorrhoids. Although thongs don't cause hemorrhoids, the constant contact and rubbing of the rectum by your thong can exacerbate them, especially during an intense workout. The website for the Mayo Clinic warned that irritated hemorrhoids can itch or bleed and may even get infected.

So do yourself and your bottom a favor and go for good old briefs when working out. You'll feel much better in the long run.

More Like This
Is Salicylic Acid Safe To Use On Skin During Pregnancy?
Considering Getting A Tattoo While Pregnant? Here’s What To Know
9 Surprising Signs You Might Have A Sugar Intolerance
Toe-tally Cute Summer Pedicure Ideas