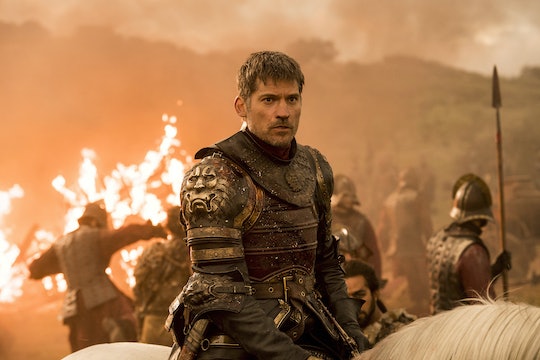 If this were almost any other show, the idea of a main character like Jaime Lannister being dead would be totally benign. But since it’s a show where they regularly kill off the characters we’ve come to love the most, it’s alright to ask, is Jaime Lannister alive on Game of Thrones? Cersei would not take his death lightly. In fact, she’d be the one to mourn him more than anyone, even Tyrion, and that anguish could be what sets her on a destructive warpath.

It could also be what ultimately destroys her, but if Cersei wanted revenge on the women of Dorne for killing her daughter, she’d definitely be out for both Daenerys’ and Drogon’s blood. And thanks to some recently released press photos of Episode 5 — along with Nikolaj Coster-Waldau’s own worries about his character — things are not looking good for the Kingslayer.

In a May 2017 interview with Observer.com, Coster-Waldau said that if he had things his way, Jaime would die by dragonfire. "It has to be a dragon death," he said. "It’s got to be the dragons that get him." It would certainly be a hero’s exit for the Lannister who’s tried to gain some semblance of redemption throughout his Game of Thrones journey. And it doesn't help that one of the Episode 5 photos includes a shot of Cersei looking very upset while sitting on the side of her bed — almost as if she's just been told some very grave news... like that her brother is dead.

Coster-Waldau went on to reveal to Observer.com, "There has been a couple times where I’ve actually, by accident, said something I shouldn’t have. But because nobody knows, they don’t necessarily pick up on it."

Of course now we know that Jaime doesn’t die by a dragon, but because of Drogon’s fiery breath and Bronn leaping off his own horse to push Jaime in a lake, his potential death might still be because of a dragon. Following Season 7 Episode 4, Entertainment Weekly spoke to Coster-Waldau about that epic battle scene and his own feelings on Jaime being alive or dead on Game of Thrones. Although the actor couldn’t give out anything concrete, he did note that one of the script directions said, "One of our main characters is about to die…"

We didn’t see an actual death during the Drogon battle on Game of Thrones, but we did see Jaime quickly float down into an unnaturally deep lake and he definitely fits the description of "main character," doesn’t he?

Fans might argue, though, that before Jaime dies, he has to fulfill the Valonqar prophecy of being the little brother to kill Cersei. Even so, the Faceless Men have ways around that (i.e. Arya somehow getting her hands on Jaime’s face and wearing it to kill Cersei herself).

But for every fan who claims there’s no way Jaime could survive his fall into the lake based on his armor alone, Coster-Waldau revealed an important clue about Jaime’s fate on Game of Thrones to The New York Times. "It seems impossible to survive that," Coster-Waldau agreed, of Jaime’s fall into the lake. "Luckily, he’s not wearing the Kingsguard armor, which is made of brass."

So does this mean that Jaime’s armor won’t cause him to sink into the dark abyss and he’ll instead be able to fight his way out of the water somehow? Either way, Cersei’s worried face in one of the photos for Season 7 Episode 5 does not make Jaime’s fate seem very positive, even if he does survive.