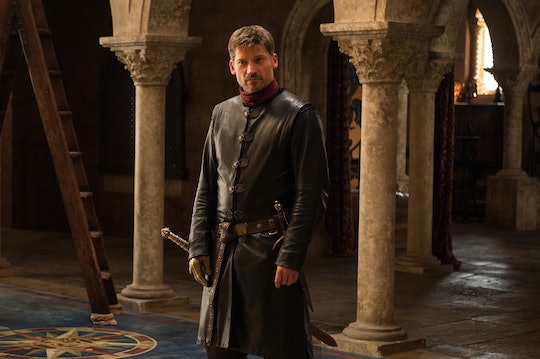 Things Aren't Looking Good For Jaime On 'Game Of Thrones'

At the end of Season 6, Episode 4 of Game of Thrones, Jaime was seen falling into a seemingly bottomless body of water, covered in heavy armor, and potentially slightly burned from Drogon’s fire breath. But does Jaime drown on Game of Thrones? Things don’t look good right now for the commander of the Queensguard. He almost got roasted alive, like dozens of other soldiers just minutes before, but at the last second, what looked like Bronn pushed Jaime out of the way and into the water. The last shot of the episode was Jaime, still wearing thick heavy armor, sinking down into the abyss.

However, I think Jaime isn’t going to drown on Game of Thrones for an important reason. More than anything else, Jaime still has to fulfill the valonqar prophecy brought to Cersei as a child. The prophecy, as shown to viewers back in Season 5, was told to Cersei by Maggy the Frog. She predicted that Cersei would have three children and lose them all (check) and that her husband, Robert Baratheon, would have many more (also, check), and that "when your tears have drowned you, the valonqar shall wrap his hands about your pale white throat and choke the life from you."

In High Valyrian, valonqar means "little brother." Since Jaime is Cersei’s little brother by a few minutes, it’s been a well-held theory from fans that the valonqar Maggy referred to will be Jaime, rather than Tyrion. So if Jaime is going to take down Cersei after watching her use her power for personal gain rather than for the good of their people, he has to survive his fall into the water.

In an interview with Entertainment Weekly, Nikolaj Coster-Waldau (who plays Jaime) talked about Jaime’s motives in trying to take on Drogon himself. "Jaime is such an idiot that he thinks for a second, 'If I can do this, I can win the whole thing in a Hail Mary,'" Coster-Waldau said. "It’s a terrifying thing when this monster flamethrower comes along and incinerates thousands and thousands of men who are just doing their job."

He also revealed that the script itself for the episode said, "One of our main characters is about to die…" Since we haven’t seen Jaime’s fate yet, it could have been him, but he has more to do first, right? Right?

Although it would definitely seem like Jaime is going to continue to sink and drown, if he was truly going to die on Game of Thrones, as least at this point in the series, I'd think it would have been by Drogon’s fire. That at least would've been a more exciting way to go. But if he is the one to fulfill the valonqar prophecy, then he still has a bigger purpose to fulfill.

Despite coming from a family that made villainous characters like Cersei and Tywin, Jaime has always seemed like he wanted (and was meant for) something better than being another Lannister bad guy. Even when he was charging at Daenerys with a spear in one hand, he was likely doing what he thought best to protect his people, many of whom were innocent soldiers. He was also the man who killed Daenerys’ father, the Mad King Aerys, years ago, affording him the nickname of Kingslayer, so maybe he was having some flashbacks as he made a beeline for Daenerys at the end of Game of Thrones Sunday night.

Game of Thrones has never shied away from killing off beloved characters, so in that line of thinking, Jaime could drown, but since he has more to accomplish first, I don’t think this is the end for him just yet.