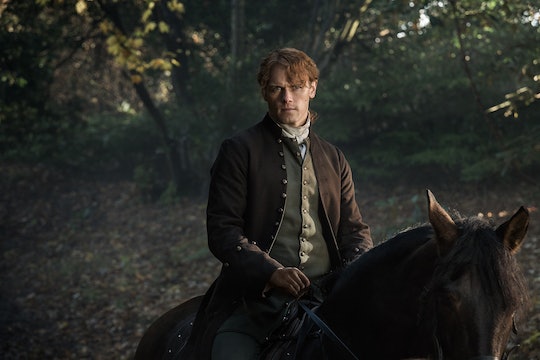 Did A Real Jamie Fraser Exist Outside Of 'Outlander'?

I know he's a fictional character, but there is a very real and aggressive part of myself that wants the gallant James Fraser from Outlander to be real. A lot of the historical aspects of the series are based in fact, so why not this particular character? So is Jamie Fraser from Outlander based on a real person? Basically, the answer is yes. And no. (I know. I'm sorry.) There is no historical evidence that an uncommonly tall and sexy red-haired Scottish man named James Fraser ever married a Sassenach woman from the 1940s and then went on to inspire cult-like devotion in everyone he ever came into contact with due to his honorable gallantry and charisma. But Clan Fraser definitely existed. Warning: this post contain book spoilers from Voyager.

The series of books that started with Outlander was written by Diana Gabaldon, who, 20 odd years and eight books later, has become an expert in 18th century Scotland. In an interview with National Geographic, Gabaldon said that the hero of her story was simply called "Jamie Blank" until inspiration struck at a certain point in her research into the bloody battle of Culloden. While thousands of Highlanders died in the battle, there was no way the hero of the story could perish there.

I was reading a book for research called the Prince in the Heather, by Eric Linklater, which described what happened after Culloden. It said that, following the battle, 19 wounded Jacobite officers took refuge in the farmhouse by the side of the field. There they lay for two days with their wounds, unattended in pain. At the end of that time they were taken out and shot, except one man, a Fraser of the Master of Lovet's regiment, who survived the slaughter. And I was thinking that if I expect Jamie to survive Culloden then his last name better be Fraser.

If you've read ahead, you'll recognize this scene from Voyager in which Jamie is dragged by some of his men into a farmhouse with several other men all dying of their wounds. The men are all told they will be shot for treason, but the officer who finds them recognizes Jamie as the man who saved his brother John Grey. So he sends Jamie back to Lallybroch, where he somehow manages to survive (even without Claire there to attend to his wounds).

So while no, Jamie is the pure product of Gabaldon's incredible mind, he was inspired by a real-life man.