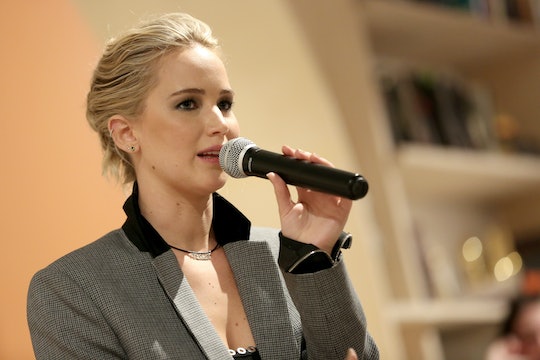 Jennifer Lawrence's Role At The 2018 Oscars Makes A Powerful Statement

Hollywood's biggest night finally arrived Sunday, but before this year's host, Jimmy Kimmel, took the stage to kick off the 90th Annual Academy Awards, A-list actors and actresses made an important first stop on the Oscars red carpet. Ahead of the broadcast, fans were wondering if one of the most popular A-listers Jennifer Lawrence would be at the 2018 Oscars. Lawrence was indeed confirmed to attend, but the 2014 Best Actress Oscar winner wasn't invited just to enjoy the show. Along with two-time Oscar winner Jodie Foster, Lawrence was tapped to announce the winner for Best Actress in a Leading Role, according to Variety — and that honor breaks a long-standing Oscars tradition.

Each year, the highly-coveted Best Actress and Best Actor awards are usually announced by the previous year's opposite gender winner (that is, the former Best Actor would hand out the Best Actress award, and vice versa), which means that this year's Best Actress award would normally be handed out by Manchester By The Sea star Casey Affleck. But in January, Affleck withdrew as an Oscars presenter in connection to "two settled sexual harassment lawsuits that stemmed from the set of his 2010 film I’m Not Here," according to Billboard, leaving the presenter role wide open.

Of course, the fact that Affleck even withdrew as a presenter in the first place seems reflective of the incredible female-led #MeToo and Time's Up movements, which are finally pushing back against the decades of discrimination and sexual abuse that is ingrained in the entertainment industry (and, well, pretty much every other industry in existence). It's already had a significant influence on this season's award ceremonies: at the 75th annual Golden Globe Awards in January, attendees opted to wear black on the red carpet in support of Time's Up, and instead of chatting about what designer gown they were wearing or how long it took them to get ready, many celebrities used their red carpet interview spots to discuss the importance of the movement, and how to push it forward.

The all-black dress code wasn't actually be part of the Oscars this year though, according to The New York Times, and in general, it's expected that political and social issues will play a smaller role at the Academy Awards than they have in other awards ceremonies this season (the Screen Actors Guild awards had an all-female lineup of presenters for example, according to TIME). But while the Oscars red carpet might not have had as much of a focus on calling out the culture of misogyny and sexual harassment that so often underlies the entertainment and film industries, Lawrence's role as a stand-in for Affleck also doesn't exactly feel like a coincidence.

For one, the fact that two female Oscar winners were chosen to announce the award is important — after all, there are technically other scandal-free Best Actor winners who could have replaced him to follow the tradition if the Academy was really trying to distance itself from making a political statement (though, to be clear, that would have been a huge mistake). But Lawrence was specifically a pretty great choice to replace Affleck. In October, the outspoken star gave a speech at ELLE's Women in Hollywood event, and revealed some of the "degrading and humiliating" experiences she'd had as a young actress, like when a producer had her "do a nude lineup with about five women who were much, much thinner" and then recommended she use the photos from the lineup as weight loss motivation.

That wasn't the first time though that Lawrence spoke up about the B.S. she'd endured as a female actress. Earlier, in 2015, Lawrence also made waves for calling out gendered pay inequity in an essay in Lenny Letter, where she revealed she was paid significantly less than her male costars for her work in American Hustle. And most recently, according to Entertainment Weekly, Lawrence announced that she and former E! News anchor Catt Sadler are currently working on an upcoming docuseries focusing on the gender wage gap (in December, Sadler left her 12-year gig at E! News after she learned her male co-host was making double her salary, according to People).

Although Lawrence may not be nominated herself Sunday night, her appearance at the Oscars is still notable. While the red carpet might still be full of designer gowns and superficial inquiries about beauty routines, the fact that Lawrence and Foster were tapped to replace Casey Affleck and hand out one of the night's most important awards is a reminder that Time's Up and #MeToo won't be ignored.