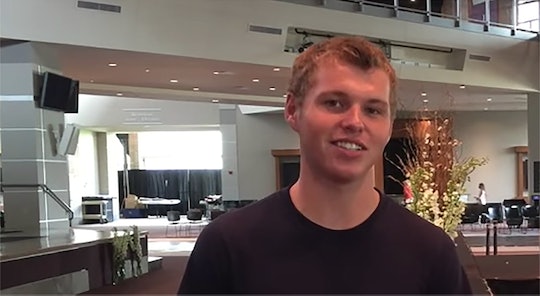 Counting On fans love it whenever a Duggar sibling announces a courtship because it means lots of cute photos, a wedding, and future kids will likely follow. And now that John David Duggar is officially engaged to Abbie Burnett, people are itching for the next Duggar courtship. So, who is next in line? Some people think Jeremiah Duggar is courting Burnett's sister thanks to an interesting photo John David shared to Instagram on Wednesday. Let the speculation begin.

If you're familiar with John David, you're probably *loving* his new attitude. John David seems happier than ever thanks to Burnett's influence, and he's way more social than he ever used to be. For example, on Wednesday, John David took to Instagram to share a fun photo with Burnett, Jeremiah Duggar, and three of Burnett's siblings. Although the names of the siblings aren't officially confirmed, some Redditors think the snap features Benjamin, Carinna, and Maggie Burnett. One particularly observant sleuth found an old website with photos of the Burnett siblings, and I think it's safe to say they guessed correctly.

Woah, there's a lot to dissect here. First off, one has to wonder why Jeremiah joined the outing. Although some might argue Jeremiah was the designated chaperone (yes, all unmarried Duggar couples must be chaperoned) for the evening, it doesn't add up when you consider Burnett's siblings were also present. And if Jeremiah wasn't the chaperone, then it's reasonable to assume he tagged along because he's courting one of Burnett's sisters. This theory gains credence if you think the photo was snapped in Burnett's native Oklahoma. Why would Jeremiah fly all the way to Oklahoma from Arkansas for some chicken nuggets? The logic there doesn't add up.

Oh, and if you really want your mind blown, Maggie and Carinna are twins — just like Jeremiah and his brother, Jedidiah Duggar. Yup, Duggar fans might witness a twin-filled wedding in the near future. One can dream, right?

"Maybe it's the twins, Maggie and Carinna? They're about the right age to court Jeremiah," one fan commented about the women in the photo.

"On a double date perhaps and HE is being chaperoned! Wink!," another fan joked in response to the possibility of Jeremiah acting as a chaperone.

When one fan speculated Jeremiah is dating Maggie, a commenter penned: " ... It's also her birthday today, so if Jeremiah is courting her, it would make sense for him to visit her in Oklahoma this week!"

If I had to guess, I'd say there's a strong possibility Jeremiah is dating — or about to date — one of Burnett's sisters. Not only is there the whole twin thing going on, but Jeremiah just turned 19 years old in December. Jeremiah is at the age when Duggars typically enter a courtship, and I won't be surprised if Jim Bob and Michelle Duggar make a special announcement soon.

Although it remains to be seen if Jeremiah is dating, it's clear some fans will be heartbroken if he is taken. Simply put, a lot of people like Jeremiah.

"Jeremiah 😍," a fan wrote next to a heart eyes emoji.

If you're still on the fence about Jeremiah's dating status, I recommend keeping tabs on the Duggar's social media accounts. The Duggars typically drop a bunch of hints on social media before they share big news, so John David's photo-op might have been planned in advance. Translation: stay tuned.