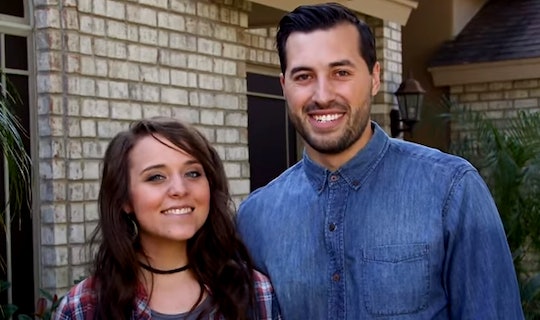 Is Jeremy Vuolo Close To The Duggar Family? Fans Have Questions

The Duggar family of TLC's Counting On has always seemed like a close knit group, which is decently impressive when you consider the sheer size of their family. Not to mention the fact that new members are joining all the time through courtship, marriage, and of course all the sweet little babies. However, some fans have raised questions about whether or not Jinger's husband, Jeremy Vuolo, is close to the Duggar family. It seems there have been more than a few clues that the Vuolos could possibly be the wild cards, and not just because Jinger likes wearing pants and such.

Jeremy Vuolo has long been seen as a bit of a rebel compared to the ultra-conservative Duggar family, especially where patriarch Jim Bob Duggar is concerned. While the Duggars have a laundry list of activities their children are forbidden from engaging in, like premarital sex, Halloween, dancing, women wearing pants, to private phone calls and drinking alcohol, Vuolo has a bit of a checkered past. In 2008 he was arrested for drunk and disorderly conduct after he harassed a police officer, out-of-character behavior he explained to In Touch Weekly, “I was part of the college party scene and was living foolishly. I’m not perfect, but I sought out accountability and I now see great victory in my life.” Vuolo also has tattoos, another no-no in the world of the Duggars. But none of that stopped Jinger from falling in love with Jeremy and moving away from the family compound in Arkansas to Jeremy's home in Laredo, Texas, where he is a pastor at Grace Community Church.

In fact, Jeremy recently gave a sermon at his church that has fans thinking he might have been directly calling out the Duggar family. According to In Touch Weekly, Jeremy criticized people who "profess Christianity but reject the engagement of the mind." He continued by saying:

As a result we have a whole generation conditioned to go on to believe what Mom and Dad believe. They're not challenged to discern the truth or question what they've been told.

Some fans on Reddit noted that this sermon seemed to specifically describe the parenting style of the Duggars, who spend a whole lot of time and effort imposing limitations on their children, to the point of homeschooling them in a very non-traditional fashion and refusing to allow them any privacy.

Fans have long speculated that Jim Bob Duggar regrets allowing Jinger to marry Jeremy. After all, Vuolo moved Jinger away to Texas, while the rest of the married daughters remained close by. He also has encouraged Jinger to travel the country and experience life as a wife with some newfound freedom before becoming a mother, while Jim Bob puts procreation above almost all things in a marriage (Jinger and Jeremy are expecting their first child this year after two years of marriage).

The Duggars have remained close-lipped about the possible tension, even as it seemed to spread through the rest of the family. Jinger's sister Jill and her husband Derick have reportedly been at odds with the Vuolos. In a 2017 sermon, Vuolo went after missionaries who "have never been established by a qualified church" who are "doing more damage than good" by being "unqualified, uncalled, unconfirmed, unsent zealots." Derick and Jill Dillard are missionaries from an unqualified church so... shots fired, I guess. Since then, neither Jill nor Derick follow either of the Vuolos on social media, which seems like a pretty clear snub.

Whether or not Jeremy and Jinger Vuolo are actually snubbing the Duggars or just simply trying to carve their own path in life is anyone's guess at this point. But, if Jeremy really is trying to encourage his wife to broaden her horizons and let go of some of the restrictions of being raised in the Duggar household... I say yes to all of that please.