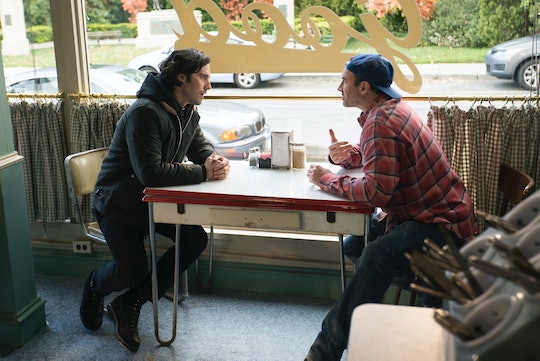 Is Jess The Father Of Rory's Baby? The 'Gilmore Girls' Revival Left Their Story Unfinished

(Warning: This post contains spoilers from Gilmore Girls: A Year in the Life. Do not read this unless you want to be spoiled.) I think many people thought that the final four words of Gilmore Girls: A Year in the Life were going to bring closure to the series at long last. But if anything, it opened up a brand new storyline when Rory revealed to her mother, Lorelai, that she was pregnant. And as the world collectively gasped at the sound of those words, it also made us wonder: who's the father? Of course, Logan seems like the most likely option, considering how recently the two of them were together, but I think it's also possible that Jess is the father of Rory's baby on Gilmore Girls. Just here me out on this one.

I realize that Jess and Rory's relationship appears to be strictly in the friend-zone throughout the revival series. The only interaction fans see between the two of them involves him giving her advice about writing a book about her life. They share a drink and that's basically it. There was no flirting and no indication that they thought of each other in "that way" anymore... that is, until Jess gave Rory that longing look through the window after saying goodbye. Seriously, the look on his face was heartbreaking. He may have told Luke he was over that relationship, but it's clear that couldn't be further from the truth.

So for starters, the feelings are still definitely there on his end. And while the writers seemed to go to great lengths to make it seem like Rory no longer felt anything romantic for him, that doesn't mean that's necessarily the case. We don't know if they interacted more than what we saw on-screen. Maybe they were up late one night brainstorming ideas for her book — one thing led to another and boom: a Jess and Rory hookup occurred. Granted, I'd be devastated if that were the case and we didn't get to see that play out. But then again, that would also mean that a Jess baby was on the way and I am all about that, so I'm torn.

The truth is, we really have no idea who the father could be. Viewers were only given brief glimpses into the lives of these characters throughout the course of a year. So these four episodes were a small representation of what their lives were like at the time. Anything could've happened without our knowledge, including a Jess hookup. Sure, Rory never mentioned it to her mother, but then again, she kept her affair with Logan a secret for a while, so I wouldn't rule out the possibility that Logan wasn't the only ex she became well acquainted with again.

Is it a pipe dream? Maybe. Will we ever find out the answer? Hopefully, but perhaps not. In the meantime, though, you can't blame a girl for dreaming.