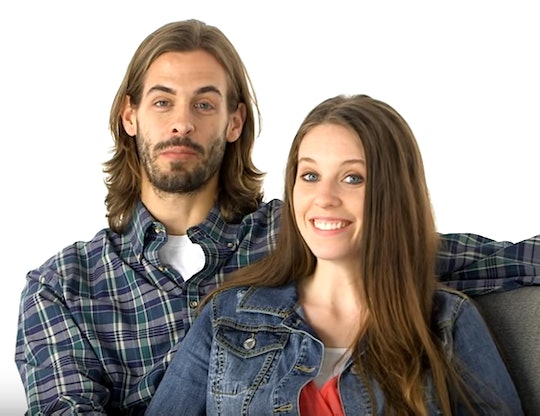 I think it's safe to say most people are well aware that there is a serious Duggar baby boom going on right now. Several Duggar daughters and Duggar wives are pregnant right now, while Jessa Seewald just welcomed her first daughter, little Ivy, a few months ago. But that doesn't necessarily mean every one of the Duggar women are hoping to have another baby. After a few recent Instagram posts, fans started to wonder if Jill Dillard was pregnant. But her husband had some typically blunt words for the rumors.

Jill and Derick Dillard have been married since January 2014 and are parents to two little boys together, 4-year-old Israel and 2-year-old Samuel. As Jill Dillard's sisters-in-law Lauren Duggar, Kendra Duggar, and Anna Duggar are all pregnant at the moment, Counting On fans were apparently wondering if she was planning on having another baby. Perhaps especially since Jessa Seewald, who had 4-year-old son Spurgeon and 2-year-old son Henry sort of in tandem with Jill, recently welcomed daughter Ivy in May with husband Ben Seewald. Maybe people were thinking they should keep the streak going or something. At any rate, the couple hosted an Instagram Live session on July 18 when the subject of a possible pregnancy came up.

On Thursday Derick Dillard was filming his wife cooking dinner at an undisclosed location while simultaneously fielding questions from fans in real time. Fans were typing in their questions and the couple answered on the live feed, as per CafeMom. No big shocker here what with all of the Duggar pregnancy news flying around, the most popular question was whether or not Jill was pregnant. Despite the fact that in 2019 I thought we all agreed we wouldn't be asking women that question any more... or perhaps that was just me.

At any rate, Jill reportedly looked offended (because of course), and said, "No." Derick, however, decided to pile on with his own response.

We're not going to be pregnant this year.

At which point Jill asked him, "How do you know?" and he replied, "It would be biologically impossible to have a baby this year."

Which could mean any number of things; that the couple are having fertility issues, that they're using birth control, or perhaps just that, even if Jill was pregnant, she would not give birth before the end of 2019.

Oh that Derick is so coy.

So why did people think Jill Dillard was pregnant beyond the fact that so many of the Duggar women are pregnant? She wore a loose dress one time on Instagram.

Back in May Jill shared a picture of herself wearing a dress from her cousin Amy's 3130 clothing line, and thoughtless fans immediately started to ask if she was pregnant in her Instagram comments.

Whatever Jill Dillard's parenting journey might look like, she doesn't owe anyone an update about her plans or anything else at all. Perhaps she is in a place where she simply wants to enjoy the two children she already has and all of her nieces and nephews.

We don't know and she doesn't have to let us know.