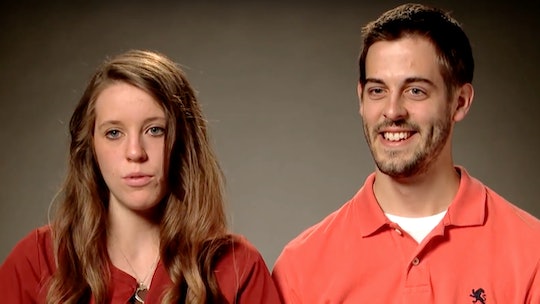 Jill Duggar Is Childproofing For The 3rd Time & Fans Have Questions

Though other people's pregnancies and family building timelines are absolutely nobody else's business, a new post from one of our Counting On faves have some questioning whether or not the Dillards are getting ready to welcome a new baby. Is Jill Duggar pregnant? She's "childproofing" for the third time, according to her Instagram, and some fans have questions.

Given that she's a Duggar — all of whom are notorious for extremely large families and the belief that reproduction is an issue governed by divine will — it wouldn't be entirely outlandish to assume that she could, in fact, be expecting. Back in 2014, she and husband Derek Dillard told ABC News that they wanted "as many kids as God will give [them]," and that if biological children aren't possible, they've discussed adoption. "My parents have kept popping them out so we'll see how [our] fertility is," Jill said at the time.

As of now, the Dillards are parents to two sons, Israel and Samuel. Their eldest son was born in 2015, and their youngest in 2017, Us Weekly reported. It's been over two years since they last welcomed a child, leading some to believe it might be time. However, it was a particularly interesting Instagram post that garnered a lot of attention.

On Sunday, Jill posted a photo of herself sitting in front of a handful of different power tools, such as a drill and bolts and screws. "Finally... for the 3rd time in 3 years I’m getting the cabinet locks on," she wrote in the caption, before tagging it: "childproofing."

It seems like an interesting thing to be doing now, given that her kids are moving out of toddlerhood. Some fans say it might be a hint. "Oh wow! Y’all expecting baby #3? Great that you’re getting a head start on #babyproofing!" one comment read. "Aww was secretly hoping that was a pregnancy announcement! Keep up the handy work mama! Jill of all trades!!!" said another.

Childproofing is the process of safeguarding or blocking access to certain areas of the home that could pose a potential danger to a child just learning to crawl or walk. According to KidsHealth.org, this can include installing gates to restrict access to bodies of water, such as a pool, or covering electrical outlets, blocking off stairways, or locking cabinets that could have toxic substances within them, such as cleaning products. It seems that in this case, Jill was doing the latter.

Though childproofing is a typical way to prepare for the arrival of a new baby, it certainly does not necessarily mean she is pregnant (though the timing is a little confusing, if she isn't.) Childproofing is more important when a baby is not an infant, so it would be more for her older sons than anyone else.

One commenter agreed that the speculation was uncalled for. "Guys... Sam is only 2 and they just moved... putting locks on a cabinet does not indicate someone is pregnant by any means. Two year olds are into everything. I’m sure it’s just a precaution given her children are young and she has so many nieces and nephews. Baby proofing your cabinets would not be your first step of preparation when you find out your pregnant," they wrote.

That may be the case, but it just goes to show how excited fans and followers are to potentially welcome a new Dillard. Whether she is or whether she isn't, it's nice to keep up with the Duggars as they go onto build their own happy (and often very large) families.

More Like This
All Your Preschooler's Elmo Questions, Answered — By Elmo Himself!
Blake Lively Revealed She's Pregnant With Baby #4 In A Sparkly Dress & Sky-High Heels
Chrissy Teigen & John Legend Are Back On The Red Carpet
Snooki Family Dinner Interview