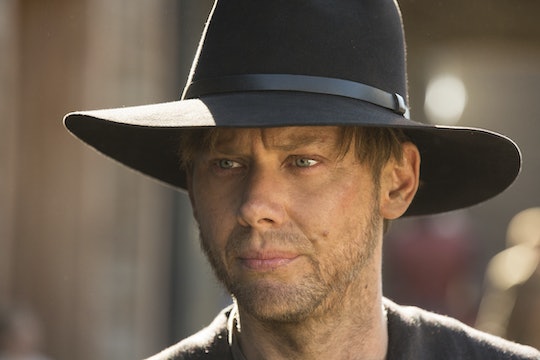 Westworld Season 1 ended with confirmation of the fan theory that had been picking up speed for weeks: the Man in Black was none other than William, the tender newcomer who found himself lovestruck by Dolores in a timeline occurring 30 years in the past. Since the storyline resolved by presenting us with the two-timeline narrative, finally converging in one place, fans of the show may be wondering: is Jimmi Simpson in Westworld Season 2? The actor who plays William accidentally spilled the beans before anyone from HBO. (Although, who could blame him?! HBO is a factory of secrets and it's impossible to keep track of who has divulged what and when!)

According to Vanity Fair, at the Television Critics Association’s press tour this past January, he replied, "I thought it was already a thing," to a reporter who asked if he'd be involved in Season 2. Realizing he had just broken a huge story, he hastily clammed up, saying, "But now that you’re asking me, I’m gonna shut up." Later, when prodded for more information and because you can't put toothpaste back in the tube, he said, "I mean, yeah, I pop in."

It was a surprising admission, because just a month earlier, he'd told Vanity Fair that his storyline was over. When asked if he'd be returning for Season 2 in that interview, he answered with a simple "no." Then, when the reporter expressed that it was a bummer, Simpson replied, "I feel the same way, like gosh darn. My William has served his purpose. As of now, I’ll be done at the end of Season 1."

But Simpson does feel like there's more for his character to explore in Season 2. For example, we know that when William first entered the park, he was reluctant to kill anyone, fell madly in love with Dolores, sensed her underlying sentience, and wanted to take her home with him to the real world. Unfortunately, he was engaged to his boss (and sadistic park buddy) Logan's sister. Logan tried to reason with him, telling William that the park wasn't real, he was taking it too seriously, and was ignoring all the best fun murder parts. To prove to William that he was being delusional, Logan stabbed Dolores right in front of him, and she ended up in the church where timelines converged with the Man in Black.

Obviously, the Man in Black is a super mean dude who's basically a shell of a human being after sustaining some pretty terrible traumas. We know that in the real world, his wife (possibly Logan's sister?) has left him and he now spends all his time in the park trying to reach a rumored secret level known as The Maze. Unlike the cautious park employees, the Man in Black actually wants the hosts to become sentient because the only time he feels truly "alive" is when there are real stakes in the park — including real danger.

Elaborated Simpson at the TCA panel:

I wish there was exploration between the time when William’s heart is broken and we see the result. I’ll say that. I want to know how much it takes and how hard he tried not to go there.

It would be a really interesting arc to watch unfold on-screen. After all, we don't know much about William's emotional state between "watching his future brother-in-law murder his side piece slash true love" and "enabling an army of robots to stage an uprising against humans." It makes sense how he got there, but it would be great to get a little more insight into the character. Luckily, it seems like we'll get it this season.