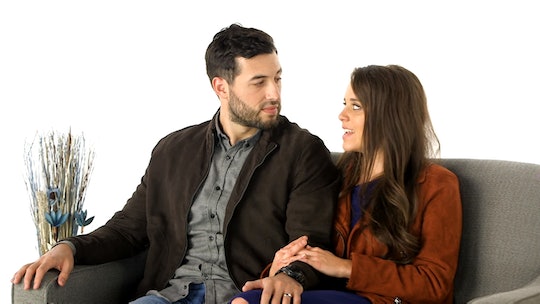 Jinger Duggar Is An Individual, But Is She A Feminist?

For those with even a passing knowledge of the Duggar family — the super conservative family behind TLC’s hit series 19 Kids and Counting and spinoff series Counting On — what probably stands out most (aside from the jaw-dropping number of Duggar kids, that is) is the family’s way of living. Parents Jim Bob and Michelle Duggar have set an uber-strict standard for their kids, based on their religious ideals. For example, the girls are expected to dress modestly (no pants allowed), marry young, and eschew all forms of birth control. But at least one of their kids, 23-year old daughter Jinger Duggar, has shown a tendency to follow her own path. She may be the Duggar family's “free spirit” — and maybe even their version of a rebel — but is Jinger Duggar a feminist?

It’s certainly true that since the Christian homeschooling family first allowed TLC to film an inside look at their super-sized family, Jinger has stood outside the family’s way of doing things. For example, one of the Duggar family rules for courting, according to E! News, is that there’s no kissing or chest-to-chest contact before the wedding day. But when former professional soccer player Jeremy Vuolo proposed to Jinger during an episode of Counting On, she raised more than a few eyebrows with fans by giving him a full-frontal hug.

The couple, who recently celebrated their one-year wedding anniversary, has yet to announce a pregnancy (two other Duggar daughters were pregnant within months of saying “I do,” according to Radar Online). Some fans have speculated that the reason Jinger and Jeremy haven’t announced a pregnancy yet is because they’re practicing some form of birth control, according to In Touch Weekly. Of course, making that choice would be a huge departure from the family norm — Jim Bob Duggar has said, according to In Touch Weekly, that oral contraceptives caused wife Michelle to have an early miscarriage, and that the family now leaves all aspects of pregnancy “up to God.”

Of course, a woman's personal method of family planning — should these fan speculations carry any merit — does not make someone any more or less feminist. After all, there are dozens of reasons that could explain why someone isn't pregnant that have nothing to do with birth control. All that's known on the subject is that Jinger has said that her future family may happen "whenever — if the Lord would bless us with kids," according to In Touch Weekly.

So from what is known about Jinger, it's probably not enough to label her a feminist. At least not an outspoken one. To date, she has not made any public statement about women’s rights or promoting equality for women. But, her willingness to stray somewhat away from her family's code of conduct suggests she may be a bit more progressive than her siblings. Jinger has been spotted wearing shorts, pants, and high heels, which goes against her family's dress code for women. According to Yahoo Lifestyle, Duggar women are "forbidden from wearing pants or shorts, and must wear at least a knee-length skirt" until they get married. Once, they do, the choice is up to their husbands. Of course, again, a woman's fashion choices absolutely do not dictate whether she holds feminist beliefs. But it does make fans wonder if there is more to her "contemporary" lifestyle choices and if she's making them on her own volition.

To be clear, though, Jinger has not publicly linked these choices to anything regarding feminism outright. She's openly passionate about her faith, her family, and her marriage. But what tends to stand out to fans — wearing pants, showing PDA on social media, and not having a baby right away — simply isn't enough for viewers to call Jinger a feminist, even if these things do set her apart from her mother and married sisters.

However, having the courage to be her own person (in the face of some serious pressure to conform) is more than enough to call her an individual, though.