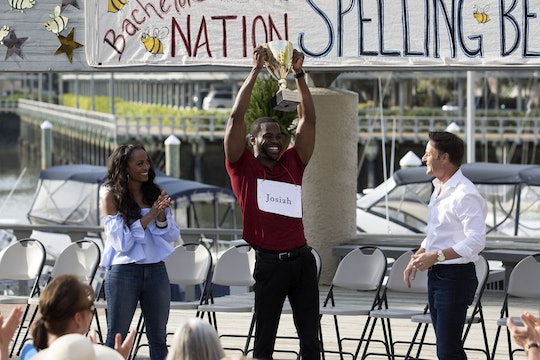 Is Josiah Single After 'The Bachelorette'?

There’s no time like the present to speculate who wins The Bachelorette Season 13 and wonder who’s still single now that filming is over. And since Josiah has proven himself to be an almost too confident contestant, fans are probably wondering, is Josiah still single after The Bachelorette? As of now, his social media pages have given very little clues to any kind of love life he might have right now. Then again, he might just be so busy working as an attorney that there’s no time for relationships anyway. But Bachelorette fans are more than willing to swoop in and give him some roses if he’s lacking.

On a recent Facebook status, Josiah wrote: "When you get a random call at the office from a woman saying she'll take you if Rachel didn't." So if he’s still single after The Bachelorette, it’s likely by choice and not due to a lack of options out in the dating field. He also seems to regularly host Bachelorette watch parties. I totally get wanting to share the experience with those around you, but something tells me that if Josiah had a girlfriend or if he’s even with Rachel now, he wouldn’t be posting notices reminding people to tell him if they want to attend his watch party.

In addition to Iggy’s recent concerns over Eric, he also tried to warn Rachel about his concerns regarding Josiah and whether he’s been genuine to Rachel. However, she didn’t seem too concerned about him and Josiah lived to fight another day on The Bachelorette. In real time though, now that Season 13 of The Bachelorette has finished filming, is Josiah still single?

At this point in the show, it’s kind of hard to imagine him as one of the more serious contenders with Rachel, since she’s been able to make real connections with some of the other men already. If Josiah is in a relationship now, he’s been keeping it on the down low since there’s no evidence to suggest he’s currently taken.

Jubilee Sharpe from Season 20 of The Bachelor did write a suspicious Twitter response when The Bachelorette creator Mike Fleiss tweeted a photo of Season 13’s contestants during their first cocktail hour. Granted, it was just an exclamation of "Josiah!" with a prayer hands emoji, but if Jubilee knows Josiah outside of Bachelor Nation, maybe it’s because they’ve already met and hit it off? No amount of social media sleuthing can crack this possible interaction, but I’d be lying if I said I wouldn’t totally ship them if Rachel sends Josiah home soon.

Maybe it was just friendly support, but either way, it seems like Josiah is still single after The Bachelorette and loving every minute of the time he spent on the show.