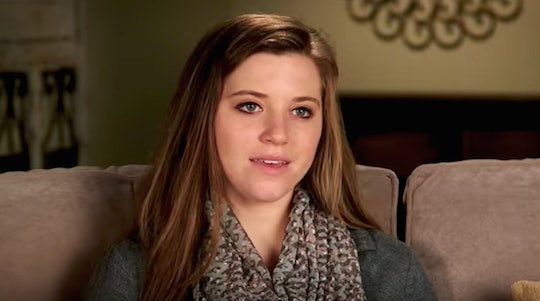 Is Joy-Anna Duggar A Feminist? Here's What We Know

Ever since 19 Kids & Counting first aired in 2008, fans have been very curious about the Duggar family and how they view the world. Most recently, fans have been especially interested in Joy-Anna Duggar, as she's newly married and expecting a baby. One of the burning questions fans have? Whether Joy-Anna Duggar is a feminist.

To figure out whether Duggar is a feminist, it's important to first understand the Duggar family's belief system and what views Duggar was likely taught as a child. The Duggars are Independent Baptists and they are a part of the Quiverfull movement, according to Hollywood Gossip. The Quiverfull movement is a "religious movement that adheres to the belief that by having as many children as possible, followers are helping spread the word of God," according to Cosmopolitan, and many members of the Quiverfull movement subscribe to the teachings of The Institute in Basic Life Principles, a homeschooling ministry founded by Bill Gothard.

If the Gothard name sounds familiar to you, I'm not too surprised. In 2016, 10 women made sexual assault allegations against Gothard, according to The Washington Post. Following the allegations, many fans of the Duggars looked deeper into Gothard's teachings and discovered some unsettling views about women as as a result. Although Gothard was put on administrative leave from the IBLP after the sexual assault allegations surfaced, according to HuffPost, many fans and former IBPL members are still speaking out against Gothard and his controversial views regarding women. Romper has reached out to Gothard regarding the sexual assault claims.

In the teachings of IBLP, women are supposed to be submissive to their husbands first and foremost. One of the so-called IBLP manuals is even titled, "Training Faithful Women Resource Manual." In another resource, titled, "How Can I Help My Husband Take On Spiritual Leadership?," the article's author advises that a woman's "main responsibility" is to "fulfill" her husband's "goals and dreams," according to the Institute In Basic Life Principles' website.

Of course, it's not anti-feminist to support your partner. What is alarming, however, is that Duggar and her sisters were likely brought up to believe that a woman's goals and needs are less important than a man's.

Furthermore, Duggar and her sisters were probably taught what some might believe are concerning ideas about a woman's duty to sexually fulfill her husband at all times. Duggar's mother, Michelle Duggar, made headlines in 2015 when she wrote an advice column about being sexually "available" to one's husband no matter the circumstance. Michelle wrote, according to People:

... be available, and not just available, but be joyfully available for him. Smile and be willing to say, ‘Yes, sweetie I am here for you,’ no matter what, even though you may be exhausted and big pregnant and you may not feel like he feels. ‘I’m still here for you and I m going to meet that need because I know it s a need for you.’

Many fans spoke out against Michelle's views, especially since her advice strongly insinuated that a woman's sole purpose is to sexually fulfill her husband. No person should ever feel pressured or intimidated to have sex, no matter what belief system they subscribe to.

Of course, it's important to note that Joy-Anna Duggar has never reiterated these controversial views on her own. Joy-Anna has yet to say anything regarding feminism outright, and she has pursued her own goals outside of her husband's own aspirations. Prior to marrying Austin Forsyth in May, Joy-Anna interned at the Arkansas House of Representatives, according to Hollywood Gossip, and it's possible that she will take college classes in the future.

It's also important to point out that it's unclear if Joy-Anna still lives by IBLP's teachings — it's totally possible that Joy-Anna and Forsyth don't agree with all of Gothard's ideas about women and their roles in the world. For now, it's best to see how things play out for Joy-Anna — as long as she's happy and fulfilled, that's all that matters.