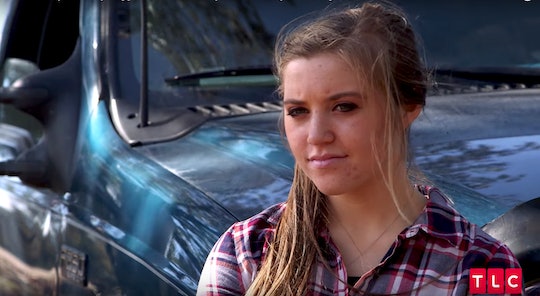 Fans Are *Convinced* Joy-Anna Duggar Is Having Twins

The Duggars catapulted to reality TV stardom on the merits of having a huge brood, so fans of the now-defunct TLC hit 19 Kids & Counting and its current spinoff, Counting On, have come to expect one thing above all else from the family: lots of babies. As the older Duggar kids get married and start having kids of their own, they're certainly giving their fans what they want. So, perhaps it's not so surprising that some Duggar diehards are convinced that Joy-Anna Duggar is pregnant with twins after a new photo that puts her bump of full display hit the internet. The 20-year-old newlywed first announced that she and husband Austin Forsyth were expecting their first child back in August, and her womb has been the subject of speculation ever since.

See, fans are focused on the timing of Duggar's announcement, the size of her bump in a recent Instagram photo, and the fact that she and Forsyth offered no explanation for moving their wedding date up from October to May. Some have speculated that Duggar may have gotten pregnant before she was married, as The Hollywood Gossip reported. Obviously, whether that's true is her business and hers alone, but it is notable to fans because sex before marriage is strictly prohibited within her ultraconservative Christian family. And that brings us to the new twins rumors, because they too hinge on an impolite examination of Duggar's bump size and strangers doing the math on how it should look, and when.

So, as People reported, a friend of Duggar posted a photo that included the mom-to-be and Forsyth when they attended a wedding in Texas over the weekend.

When the Duggar Family News Facebook page shared the shot, commenters immediately began sharing their opinion that Duggar's belly appears to be much bigger than it would be if she had gotten pregnant after her May 26 wedding — unless she was carrying multiples. (The account itself kicked off this line of thought, writing alongside the photo: "Joy in a photo from this weekend at a wedding in Texas. Does she look five months pregnant? It's got to be triplets.")

"I bet it’s twins," one commenter wrote. "They run in the family." Another chimed in: "I'm betting on twins." And it continued. "That girl is nowhere near 5 months pregnant unless she’s having triplets!" another commenter quipped. The subtext to many of the comments was that they believe Duggar's belly is bigger than it should be. "If at 5 months she's this large, I can’t even imagine what 9 months would look like," one decisive voice said.

It should be noted that commenting on the size of a woman's bump is incredibly offensive. Women carry their pregnancies in all sorts of ways and each bump is unique. So critiquing the size of Duggar's is just outright inappropriate.

And for her part — not that she needs to address this dialogue — Duggar has given no indication that she's having more than one baby this time around — although she has said she plans on having as many kids as God gives her. When she and Forsyth announced the pregnancy in a TLC video, for example, they mentioned only one baby.

Ditto the excited Insta announcement, in which Duggar referred to "the baby" — not babies — multiple times. The caption reads, in part:

The baby has arms, legs, fingers, and toes. It has a beating heart and brain waves. The baby responds to touch and is already right- or left-handed. The baby has its own unique fingerprints, which are different from anyone else's.

All of this means that, at this point, there's no real reason to think that Duggar is expecting twins. So instead of examining and critiquing the size of her bump every time a photo hits the internet, fans should simply be happy for her and leave it at that.