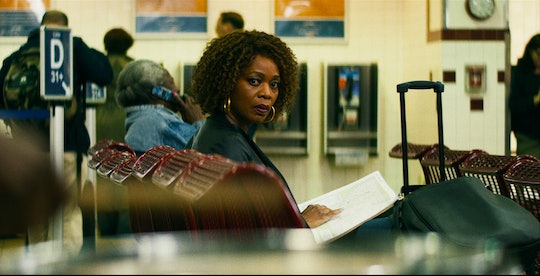 Netflix might be the go-to spot for some of your favorite true crime these days, but it still churns out original movies and TV shows that inspire viewers rather than make them afraid to sleep with the lights off afterward. Like Juanita, which stars Academy Award winner Alfre Woodard and follows the title character as she leaves her adult children at home to discover something for herself. At some point, though, you’re going to wonder if Juanita is based on a book because the Netflix Original is almost like a coming of age story for an older generation.

Juanita is based on the novel Dancing on the Edge of the Roof by Sheila Williams and the premise is similar to that of the Netflix movie. At 41, Juanita is fed up with still caring for her adult children and living a life that has become predictable. So she packs up and leaves Columbus, Ohio with a one-way ticket to Montana of all places. In the trailer, she seems to randomly choose a small town on a map, but when she gets there, she begins to find herself in a way she probably didn't think possible anymore.

It’s kind of like How Stella Got Her Groove Back, but instead of embarking on a fling with a younger man, Juanita straight up tells her love interest in the trailer that he isn't part of her plan. There are some steamy dream sequences with Blair Underwood as himself, but you can’t really fault her for having an escape from the stress of daily life.

Roderick M. Spencer, who is married to Woodard and wrote the screenplay for Juanita, read the book first and was inspired to create a movie that would speak to people on multiple levels.

"When I read it, I was like, 'Oh my God: a road movie of a woman of a certain age who hasn’t given up, who’s still punching, has strong opinions, loves her kids but is sick of them — all of those things that women of every generation and every race go through,'" Spencer told The Hollywood Reporter. "I just thought, 'If we do this right, we're going to have a movie that a lot of people can relate to.'"

Woodard told The Hollywood Reporter that her husband is "deeply ensconced" with her family after being married to her for 40 years. "He knows how language swings out of their mouth, as well as how they swing their hips, and how they have that kind of poignant thing about them, and [how they're] absolutely profane at the same time," Woodard said. "So I knew he could write the love and the fun in Juanita."

Cincinnati's CityBeat spoke to the author Williams about what inspired the story that has now inspired a Netflix film. She said that it’s not so much about a woman going through a midlife crisis, but instead about having the courage to make a change "whenever you get that feeling that maybe you can do something better or different."

In the movie, Juanita does just that and Williams said that she created the character one day when she herself didn't have the drive or motivation to get up and continue. So, as she put it, she "sent Juanita instead."

The book that Juanita is based on seems like a one-off that won't give birth to any sequels anytime soon, but the movie seems like one that won't need a continuation of the story. It’s about feeling inspired and doing something about it before you lose that inspiration and go back to the daily grind that put you in a rut in the first place. I’m not saying we should all pack up and leave our loves behind tomorrow, but Juanita could probably teach viewers a few things about living in the moment while you can.