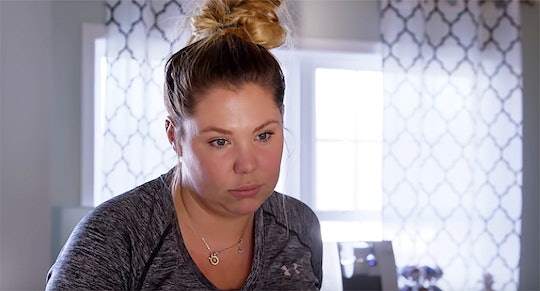 Teen Mom 2 star Kailyn Lowry has been in a rocky on-and-off again relationship with Chris Lopez, the father of her third child, for more than a year. But following a pointed tweet shared Sunday, some fans are curious if Kailyn is still dating Chris. The answer may or may not surprise some fans.

Kailyn welcomed her third baby boy, Lux, into the world in August 2017. She and Chris weren't together at the time of Lux's birth, and there was a rumor he wouldn't sign the newborn's birth certificate. Despite the parents' difficult start, Kailyn held out hope they'd get back together one day.

“In a way I hate him, because I feel like I really gave my all to him and I didn’t get that back,” she admitted in September 2018, according to The Inquisitr. “But then on the other hand, it’s like I want to thank him because I learned that I am capable of loving someone and like, truly, being faithful and committed in a relationship. And it’s sad, because I have kids with Jo [Rivera] and Javi [Marroquin] as well, but I just didn’t love them the way I loved Chris.”

Although the two did fall back into a romantic space in the year and months following Lux's birth, it looks like they were never an official couple. Kailyn vented about this issue in a recent episode of TM2, complaining, according to CafeMom:

Within the next year, if we're still doing this, I'm not gonna do it anymore. I'm getting to the point where, eventually, I want to be with someone and raise my kids with someone and have a life together and do all that because I do get so emotional and lonely. I don't want to love because I'm lonely, but I see all my mom friends are married, and here I am. Why can't he commit to me?

Unfortunately for Kailyn, the two never figured out a resolution to their relationship drama. And on Sunday, Chris tweeted a message seemingly directed towards Kailyn, writing: "Better off without that b—h and I'm glad we fell off." Yikes.

When a fan on Instagram asked Kailyn how she felt about the jab, she replied: "How he feels is none of my business."

Kailyn had elaborated on their tumultuous co-parenting relationship in previous tweets, writing on March 18: "Update: Even though it didn’t work out between us we are still trying to navigate through coparenting."

She added: "Also update: Chris and I don’t speak at all and we communicate through his mom."

It's unfortunate that Kailyn and Chris have to communicate through a third party, but it sounds like it's what's best for Lux at this point because the little guy shouldn't have to witness or hear his parents fighting.

As for the pair's romantic relationship, it sounds like there isn't any hope for a reconciliation down the line. Although Chris was the love of Kailyn's life, some things just aren't meant to be.