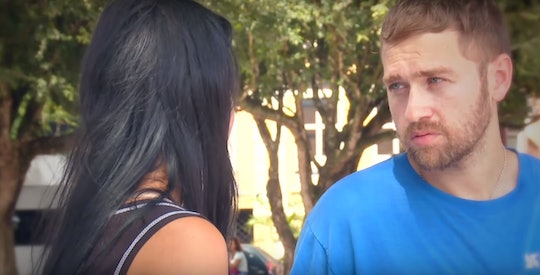 Karine Might Be Pregnant Again After '90 Day Fiance: Before The 90 Days'

Fans first met Karine Martins and Paul Staehle on Season 1 of 90 Day Fiancé: Before the 90 Days and they continued their long distance relationship during Season 2. It’s been a season of highs and lows for them, from a wedding to the loss of their first baby due to an early miscarriage. But after some deleted Instagram posts, viewers are wondering, is Karine pregnant again after 90 Day Fiancé?

A fan on Reddit with the username u/toodletwo posted the apparent evidence three months ago via alleged screenshots from Paul’s Instagram. In three separate photos, Karine is shown clutching a very pregnant looking belly. Soon after Paul posted the photos, he deleted them and right now, his Instagram is private. But if you’re like me and have to know the tea and requested to follow him, then you might have noticed other suspicious activity on Paul’s part.

In a few recent posts that he hasn't deleted, Karine is shown covering or hiding her stomach in some way. In one photo, Paul is blatantly covering her stomach with some kind of carry-on bag. It could all be an innocent coincidence, but the evidence is starting to pileup. And in Paul’s words, it looks like there could be a niño on the way again.

At the beginning of the season, before Karine and Paul’s wedding, she asked him for a baby, so pregnancy was on her mind for a long time before they actually conceived their first child. However not long after they found out that Karine was pregnant, she lost the pregnancy and it hit the couple hard. They eventually pulled through the loss together and grew closer because of their shared grief. And now, after 90 Day Fiancé: Before the 90 Days, it looks like they might be starting their family after all with a rainbow baby.

In the promo for the 90 Day Fiancé: Before the 90 Days Season 2 reunion special, it looks like Karine and Paul have a big announcement for viewers — and since Paul’s Instagram is private again and he’s become known for deleting posts that reveal too much about their personal lives, it could be a pregnancy. The timeline would make sense, if he posted and deleted possible baby bump photos months ago, potentially around the time the reunion was filmed. Maybe Karine wasn't able to travel because of her pregnancy for some reason and that’s why she video called in.

Back in September, Paul posted a photo of his home back in the United States, where his mom had apparently fixed up the bathroom to be "Karine unicorn approved." That is, she added a Squatty Potty, a pillow, and a new stuffed animal for Paul’s new bride. Of course, that definitely doesn't mean that she's only moving there because they're expecting a little bundle.

To be honest, at this point, it’s more like one big fan conspiracy, but after the traumatic experience the couple had losing their first baby, it makes you want them to have this second chance.

Neither Paul or Karine have confirmed that she’s pregnant again after 90 Day Fiancé: Before the 90 Days, but it seems like they could become parents in a few months. If all of the social media clues and allegedly deleted posts are any indication, Paul and Karine are trying to avoid giving away spoilers. Like all good things in reality TV, fans are going to have to wait and see if that’s the couple’s big announcement on the reunion special, but I'd say it's a strong possibility.