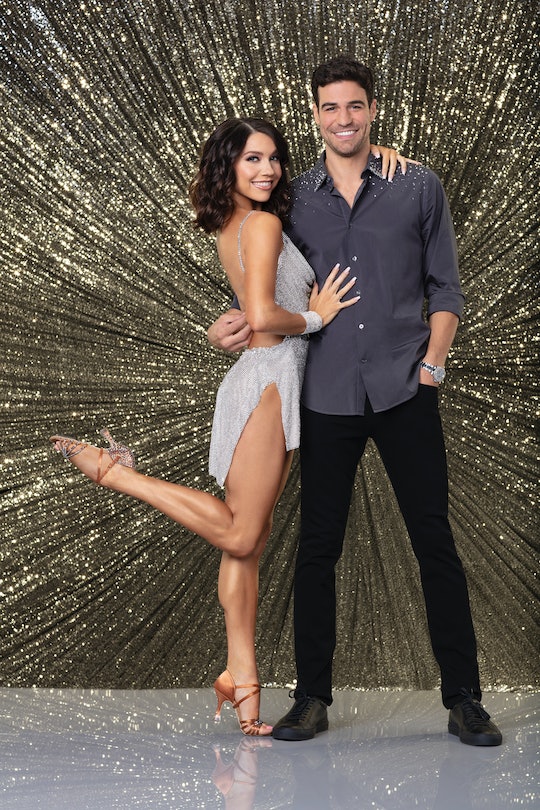 Kendall Long Was There To Support Her Man On 'DWTS'

The wait is finally over — Bachelor in Paradise fans rejoice. After fans last saw "Grocery Store Joe" Amabile, he and fellow BIP castmate and taxidermy-obsessed, Kendall Long, set off into the metaphorical sunset. To fill the Paradise void, Season 27 of Dancing With the Stars has your back, snagging Amabile as one of the celebrity contestants. With aall the amazing performances, snazzy costumes, lights and music, there's really only one question on everyone's mind: is Kendall in the 'DWTS' audience?

Because I won't make you wait as long as the show made you wait for the big reveal, yes — Long was in the audience cheering Amabile on. As a fan-favorite after a brief stint — and I do mean super brief — on Becca Kufrin's season of The Bachelorette, fans of Amabile made it clear they wanted more Grocery Store Joe. When he walked into Paradise, it was an almost immediate connection with Long where they spoke of picnics in cemeteries. I'm into it. Though Long and Amabile had a strong relationship while filming BIP, they parted ways when concerns over a possible future together crashed head-on with the fear that comes with any new relationship. After Long traveled to Chicago to mend things post-Paradise, the two have allegedly been together ever since. This is where the worlds of DWTS and Paradise collide, thanks to Bachelor Nation host, Chris Harrison. It was the BIP finale when Harrison extended the DWTS invite and Amabile accepted. The rest, as they say, is history. Amabile's partner this season is pro Jenna Johnson. According to an exclusive first meeting via People, she's a fangirl, too, and thrilled to meet Amabile. His reaction? “Oh, you’re excited, huh? Don’t be that excited," he said as they hugged. “I don’t know how to dance.” Classic Joe.

So who is Kendall Long? She is former Season 22 contestant on Arie Luyendyk's season of The Bachelor and fellow BIP castmate who, as I said, found love (possibly? hopefully?) in Amabile. While now a creative director, her LinkedIn profile claims she's worked with the likes of Comedy Central and MTV. And you know how I mentioned she's taxidermy-obsessed? Yeah — that means she has a thing for stuffed dead animals

Like all good DWTS shows, they saved Amabile for one of the final performances while other couples twirled their way across the dance floor. This, of course, left the interwebs in a frenzy because time came to a literal stop (without panning far enough into the audience to quench viewers' curiosities). Because everyone knows if Long is there to support her man, they're obviously still together and (probably) happier than ever. It's science, people.

The long-distance relationship — Amabile as a grocery store owner in Chicago and Long as a marketer in LA — must be tough, so having Amabile in Long's home state *should* make them even closer. Warning: Having a partner in the audience might make an already adorable grocer that much more adorable.

All the dances were great — especially for the first night. But there's something about watching Amabile and Long's love story play out on national TV that makes it that much sweeter. When it comes to the namesake "Grocery Store Joe," told People “We gotta lose that nickname. I want to be Dancing Joe now! That’s it. We gotta change it up!”

There you have it, folks. "Dancing Joe" has spoken. His scores might not have been the best (he earned a 5, 4, and 5 from Carrie Ann Inaba, Len Goodman, and Bruno Tonioli respectively), but as Bruno said, nobody can be good at everything. That said, I feel sure that Joe's legions of fans will vote to keep him around for at least a bit longer.