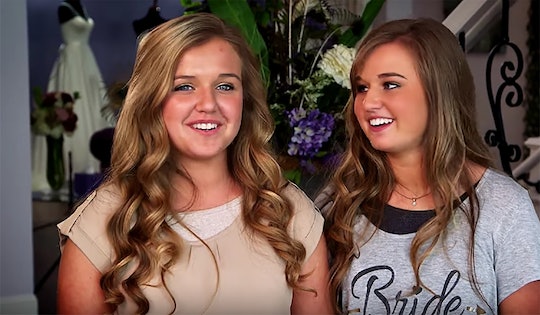 Another day, another Duggar dating rumor. This time it surrounds whether Kendra Duggar's sister is dating a Duggar brother, a suspicion which first surfaced earlier this year. But this time the rumor involves a different Duggar sibling. Oh, how the plot has thickened.

Kendra and her 19-year-old sister, Lauren Caldwell, are very close. So it's really no surprise the sibling popped up in Kendra's birth special with TLC, which documented the arrival of her second child, Addison, on Nov. 2. At some point in the video, Lauren is spotted seemingly sidled up next to 18-year-old James Duggar, who was holding newborn Addison at the time. And although the likely scenario here is Lauren was leaning over James to get a peek at her new niece, some people think this detail points to a courtship.

To be fair, it is unusual for a Duggar to get physically close to another person before courting. This is why people recently assumed a cozy picture of Jana Duggar's BFF, Lauren DeMasie, and Jed Duggar was evidence of a relationship.

DeMasie and Jed aside, the speculation regarding Caldwell and James first surfaced on Nov. 26 in Reddit's Duggar Snark forum. Someone posted a still from the episode, captioning it, "Okay, could Kendra’s sister be in a courtship ... because for the few seconds they showed this clip she was getting pretty close to him."

"It happens a lot, especially in small communities," someone said about the possibility. "We have this situation in my family. My dad's sister married my mom's brother. It's not weird. There's no blood relation there."

Someone else said about another TLC show, "If you think that’s mind blowing, look into the Sister Wives family tree."

"Eh. In my great-grandparents generation, three sisters married three brothers," another user commented. "The girls weren't even local - one by one they crossed the border from Minnesota, found some guys they liked and stuck around. Not common, but not weird."

One commenter struck down the idea, however, writing, "I think she’s getting close to the baby, and since he’s holding the baby, it looks like she’s snuggling up."

I'm more inclined to believe the last commenter's take, but you never know. Either way, this isn't the first time Caldwell has been linked to a Duggar.

Back in May, rumors swirled about a then-19-year-old Jason dating a then-18-year-old Caldwell after photos surfaced of them together in Greece. And no, it wasn't a secret clandestine vacation — the two were on a "mission trip," which is when people go abroad to "share the gospel." This courtship never materialized, however, so it probably was just a rumor.

It remains to be seen whether Caldwell is dating James, but stranger things have happened.