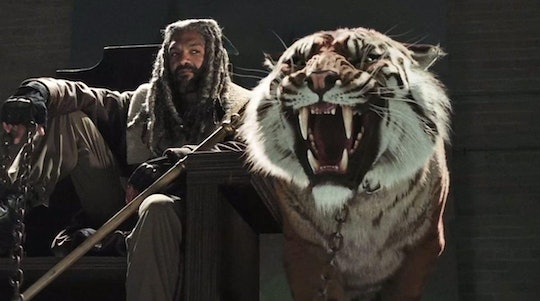 Is King Ezekiel's Tiger Real On 'The Walking Dead'? Shiva Will Play An Important Role

Fans are still reeling from the incredibly divisive Season 7 premiere of The Walking Dead, which saw the deaths of two major characters. Ending Season 6 on a cliffhanger, it was hard to focus on anything aside from wondering which character(s) would meet their makers at the end of Negan's barbed wire-covered bat, Lucille. But "Who did Negan kill?" wasn't the only question we were left with in the months prior to the premiere. We also found out that new characters, a new community, and even a tiger were on their way. But is King Ezekiel's tiger, Shiva, real on The Walking Dead?

The show played up the Negan's victim(s) angle over the months after the sixth season finale and the seventh season premiere, making that big question the focal point of all of the ads for the new season. The Season 7 trailer that premiered earlier this year at Comic-Con featured Negan's sick game of "Eeny, meeny, miny, moe," accompanied by flashbacks to the lives of each character he contemplated killing. The writers really wanted to ramp up the emotional significance of this moment, and it totally worked.

The premiere finally revealed that Negan had actually killed Abraham and (horrifically) Glenn, one of the very few original characters left from the beginning of the series. It was heartbreaking – but in a strange way, it was kind of a relief to get the deaths out of the way. Fans' focus had been almost entirely on the question of who would die. Now that we know who died, we can move on to the rest of the season and start contemplating the other big questions. Like, for example, who that dude on the throne in the Comic-Con trailer with the actual tiger is?

Animals haven't really been a part of The Walking Dead – except insofar as we've seen Daryl hunting them for food – so the introduction of the tiger was definitely an awesome surprise. Fans of the comic series know a bit more about the tiger, named Shiva, and her owner/the leader of the Kingdom, fan-favorite character King Ezekiel. In a stark contrast to most of the other survivors we've seen, who definitely haven't kept their pets with them, Ezekiel's rescued tiger Shiva is an integral part of Ezekiel's character. In an interview with Entertainment Weekly, Ezekiel's portrayer Khary Payton explained the tiger's huge significance to his character:

Shiva is the beginning and the end for Ezekiel. She’s one of the reasons that he didn’t lose hope when this whole thing started. She’s this beautiful unique creature in the middle of this dark, dark time, and so she’s beloved, and she’s also a symbol to him of what it means to be different in the context of the world that you’re living in. [...] She’s holy in his eyes.

Though, unfortunately, there wasn't an actual tiger on set filming. Executive producer/director Greg Nicotero explained to Entertainment Weekly that the tiger would be part animatronic and part CGI. The crew started building the animatronic tiger in February and plan to use digital effects to bring what'll essentially be a giant tiger puppet to life.

[W]e will digitally augment with either moving eyes or moving tail, or we will have a few shots if the creature has to walk, take several steps forward, or turn around, or roar, going from a neutral expression to a roaring expression, we’ll do those shots digitally.

Seeing Shiva in action will definitely be one of the biggest highlights of the upcoming season! Now that the mystery of the character deaths is out of the way, the introduction of Ezekiel, Shiva, and the Kingdom seems set to be the next major event of Season 7. Especially once we find out where Ezekiel (and by extension, Shiva) stands in terms of his alliance. It'll be hard for anyone to go against a dude with a tiger.