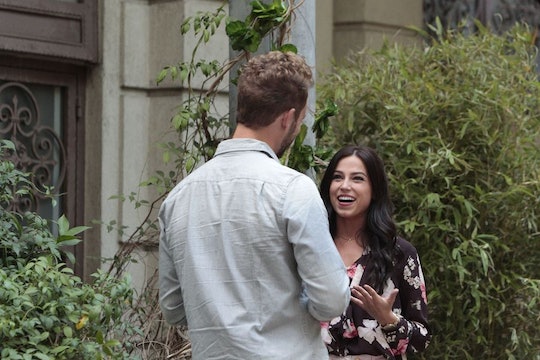 Kristina Deserves To Find Love On 'The Bachelor'

When Kristina was finally given the opportunity to tell her story on The Bachelor during Week 6, fans were suddenly given a huge glimpse into her life and background, and it wasn't hard to start to root for her. But if she doesn't make it until the very end, fans will likely be asking if Kristina is single after The Bachelor and they have every right to, because who isn't interested in the contestant at this point? Kristina got to have the first one-on-one date once they got to Saint Thomas and Nick used their time together as a chance to really get to know her. When she told her story of poverty and eventual adoption from an orphanage back in her home country of Russia, it was hard not to instantly feel protective of the 24-year-old dental hygienist and admire her for her courage and strength.

Although it's clear that she's made a great life for herself after making the very difficult decision at 12 years old to accept being adopted and move to America, her story tugged at the heartstrings of almost every Bachelor fan out there. So whether she makes it further than being part of the final six or not, is Kristina still living the single life after The Bachelor? Her social media world doesn't give much away, but she's definitely not shy about posting things to keep people 'shipping her with Nick.

Since Kristina is still a contender on The Bachelor and she hasn't been eliminated yet, the strict Bachelor rules keep her from posting anything that would give things away, but as of right now, it looks like she's just doing her thing with her squad from the show, giving me serious BFF envy. Nick might have his fair share of flaws, but Kristina deserves to find love and deserves to have a romantic happy ending, so it's kind of hard not to root for her getting that final rose of the season.

Kristina having the courage to share her story on The Bachelor isn't the only thing that warrants her the final rose and a big old Neil Lane diamond rock on her finger though. Before Taylor started her beef with Corinne, Kristina had confronted Corinne in a much more calm and cool manner, obviously trying to have a conversation with her rather than any kind of huge blowout. Out of the remaining women, Kristina has definitely become a stand-out favorite among fans, so let's hope that no matter the outcome, she eventually gets that happily ever after so oh-so deserves.