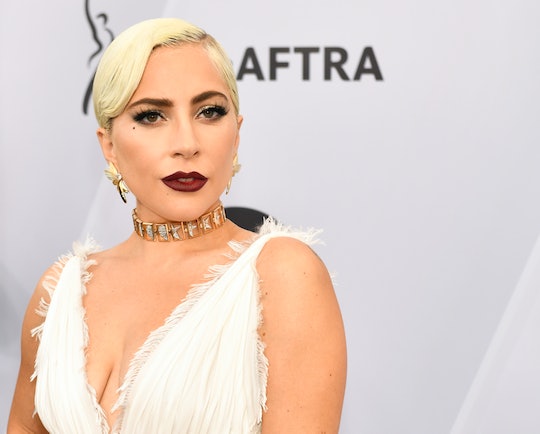 Don't Worry: You'll Definitely Get To See Lady Gaga At The Oscars On Sunday

Lady Gaga — real name Stefani Germanotta — has enjoyed an exceptional 2019 so far. The singer won an award at the Grammys on Sunday, Feb. 10, and she has received widespread praise for her role in A Star Is Born. Amid all of this success, some people are curious if Lady Gaga is going to the Oscars this year. Considering the entertainer is up for some big awards, there's a very good chance she'll show up to the event on Sunday, Feb. 24.

Lady Gaga received thrilling news on Jan. 23 when she received Oscar nominations for Best Actress and Best Song (A Star Is Born). “I am so humbled and proud to be nominated for two Academy Awards,” she tweeted after the nominations. “This is a dream come true, that a once very little girl could never believe would be happening.”

With that said, it seems reasonable to assume that Lady Gaga will be present at the awards ceremony given the nominations. This is the singer's big moment to shine, after all.

In addition to the nominations, Lady Gaga will also perform "Shallow" at the star-studded event. Making matters even more exciting? The singer's co-star in A Star Is Born, Bradley Cooper, will join in on the performance. "Cooper. Gaga. "Shallow." #Oscars," the Academy's official account tweeted on Friday, Feb. 1.

Although Lady Gaga will grace the Oscars, don't expect her ex-fiancé, Christian Cirano, to make an appearance. The two announced the end of their engagement on Monday, Feb. 19 after two years of dating.

A source explained to E! News that the exes' romance "just didn't work out," adding, "Relationships sometimes end. It's not a long dramatic story."

Despite Lady Gaga's road bump in the love department, I'm sure she'll put her disappointment aside so she can enjoy her special night at the Oscars. The event holds a special place in Lady Gaga's heart, after all, a sentiment she touched on in an interview with The Los Angeles Times:

There's really no award that is more esteemed than the Oscar in acting, and for music, it is also extremely special. Since I was a little girl, I always admired all of the artists that put in so much hard work and passion into filmmaking. Watching the award shows, I used to cry with them. It was always like I felt like I was them, even though I wasn't there. It was always a big deal with my family.

Aww. It's amazing that all of Lady Gaga's dreams are coming true.

But wait — there's more. The Oscars is so important to the actress that she made it a point to clear her busy schedule for the performance. Considering Lady Gaga is currently preparing for her Las Vegas residency, it's pretty impressive that she made this one work. As she told the Los Angeles Times:

Well, you know, that’s just what we do, isn’t it? We love to perform and we love to make art, so we’ll make it happen. That would be a tremendous honor to perform that song at the Oscars... To be recognized at this level just makes the heart explode, because truly and deeply, I still very much feel like a child with big dreams.

I don't know about you guys, but I'll definitely be rooting for Lady Gaga this Sunday. Fan or not, it's hard to argue that she doesn't deserve to be honored for her work.