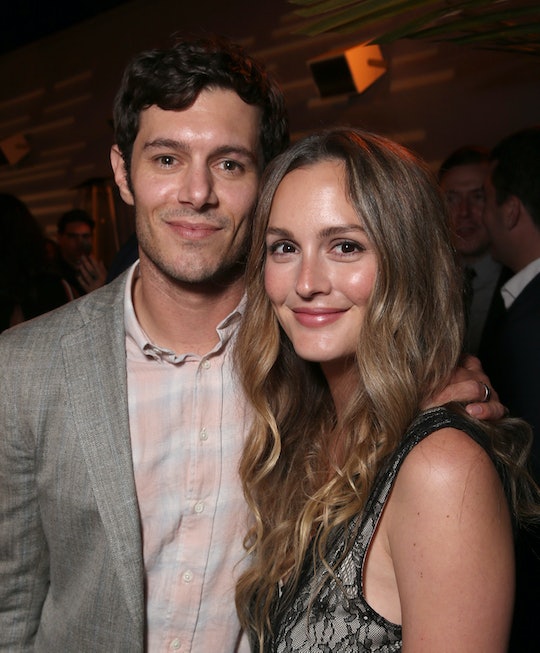 Looks like congratulations are in order for Gossip Girl star Leighton Meester and The O.C.'s Adam Brody! Photos published by the Daily Mail on Tuesday appear to suggest that Leighton Meester could be pregnant with the couple's second child.

While Romper's requests for comment from Meester and Brody's reps were not immediately returned and neither have publicly addressed or confirmed the reports, the 33-year-old actress was reportedly spotted wearing black overalls while taking a walk with Brody and their 4-year-old daughter, Arlo, with what the Daily Mail described as "much fuller tummy."

Meester and Brody, who tied the knot in February 2014, are notoriously private about their personal lives; in fact, you won't find any photos of their daughter — who was born in August 2015, according to Harper's Bazaar — on Meester's Instagram and 40-year-old Brody isn't even on social media. So it's quite possible word of Baby #2 will be kept under wraps for as long as possible.

Back in 2015, Us Weekly announced Meester's pregnancy with the couple's daughter and they never officially confirmed or announced the news themselves. And in September 2015, news of their first child's arrival was announced in a similar way.

In 2017, the Gossip Girl alum opened up in an interview with Refinery29 about motherhood and why she doesn't often talk about her daughter publicly. "I don’t talk about Arlo very much," she told Refinery29 at the time. "I am very proud of that area of my life. But I’m also really proud of the show [Making History], and of the work I do. I think the perception is: You’re an ingenue, or you’re an icon, or you’re a mom. There’s no in between."

As for Brody, he chatted about fatherhood with People back in 2016, sharing that he does a "nice morning hike with my daughter, that's always a treat. It's something to do in the wee hours of the morning when she's up. It's a good activity for both of us."

While Meester is obviously proud to be Arlo's mom and Brody enjoys his one-on-one time with his daughter, it's likely they'll keep any news about growing their family to themselves as much as possible.