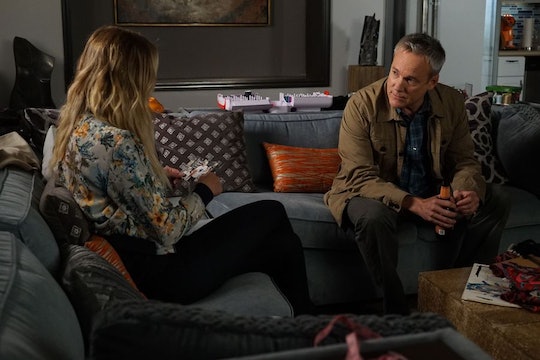 When it comes to a town like Rosewood, everyone is guilty until proven innocent. However, fans may have just gotten one step closer in finally unmasking A.D. for good. After Tuesday night's episode "Power Play," many viewers are undoubtedly asking themselves: is Lucas A.D. on Pretty Little Liars? Because it's certainly starting to look that way.

Granted, Lucas has been somewhat suspicious right from the beginning. His keen interest in Hanna has raised many eyebrows — and not just because the majority of this show's fandom is #TeamHaleb. He's just always had a mysterious way about him, which probably means he has something to hide. And it looks like there's some foundation to that assumption, especially considering what Pastor Ted (welcome back!) just revealed. Not only did he have a romantic past with Mary Drake, but during Tuesday's episode he revealed to Hanna that he was, in fact, Charlotte's father. He even showed Hanna a picture of her at a camp that he used to run back when she was little. This prompted Hannah to wonder who that boy was standing on the other side of Ted. And what do you know — his name just so happened to be Lucas, who was (according to Ted) Charlotte's best friend.

This connection proves that Charlotte and Lucas go way back. And since A.D. is hellbent on seeking revenge against Charlotte's killer, it would make sense for it to be Lucas, if they really were as close as it seems. He would've undoubtedly been very upset over her death. Perhaps he was aware of all the games she used to play on the Liars and decided to pick up where she left off in her honor.

Of course, this is all purely speculative for the time being. Hanna has yet to confront Lucas about what she's discovered, though it's only a matter of time until she does. The Liars are definitely going to want to get to the bottom of this and get some answers. Why has Lucas never said anything before? Does this mean he always knew Charlotte was Cece? How aware is he of what's been going on all these years? Maybe he's who taught Charlotte how to be so tech savvy. The mind reels at the possibilities.

Then again, when has this show ever made anything easy. This could be yet another red herring to throw us off track since we still have a few episodes to go until the finale. Either way, he's certainly an important piece of the puzzle. Let's just hope we're able to get to the bottom of it all soon.