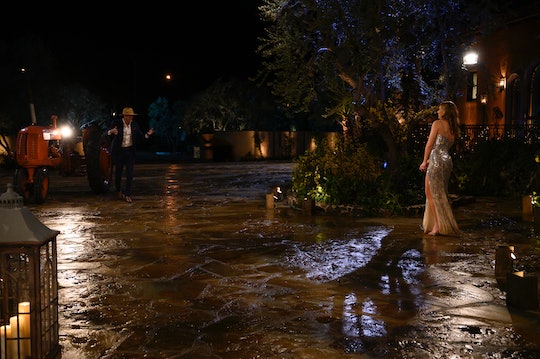 Grocery Store Joe, née Joe Amabile, became an overnight (literally) Bachelorette sensation when he got sent home on night one of Becca Kufrin's season, despite charming audiences with his humble Chicago grocery store owner vibe. While Hannah had a Chicago Joe of her own who got sent home on night one, it was Matt Donald, a medical device salesman from California, who seemed to fill the Grocery Store Joe-shaped hole in Bachelor Nation's heart. In fact, even Joe himself thinks Matt Donald is the next Grocery Store Joe.

"Welcome to the club," Joe tweeted, along with Matt's headshot. Twitter thought Hannah got it wrong, too, by sending the sweet-natured farm boy home on night one and they were quick to say so. Fans fell hard for Matt Donald and it's easy to see why. For starters, his limo entrance didn't actually involve a limo; instead he preferred to roll in on a tractor, wearing a straw hat and singing his own personal rendition of "Old Macdonald," accurately pointing out that Hannah's pool of suitors contained "here a bro, there a bro, everywhere a bro bro." He kept the hat on all night, but I guess it wasn't enough to pique Hannah's interest after a chaotic first night.

Aside from the fact that Hannah's first cocktail party boasted an unusually large group of guys — 30 in all! — the night got derailed when she discovered Scott, also from Chicago, had a girlfriend back home. Between hearing the story from Demi, who was watching the night unfold from a surveillance van outside, grilling Scott for his version of the story, and ultimately kicking him out, Hannah lost precious time with the guys. Plus, the drama left her feeling pretty discombobulated, so the guys were at a further disadvantage trying to charm her afterwards. Whether Hannah genuinely didn't feel a spark with Matt, or she just didn't get a chance to know him, he failed to secure a rose by the end of the night.

Viewers, however, got super attached as soon as his intro package introduced his home and family life. Fans learned that Matt actually grew up in a deaf household and is fluent in American Sign Language (ASL). They watched him as he interacted with his deaf mother, father, and brother, and got all the usual family advice about staying true to himself. It was clear that he came from a super tight-knit clan and fans were understandably hopeful about seeing them again come hometown dates.

Between watching him care for baby goats and sit down to dinner with his loving family, Bachelor Nation fell hard for Matt Donald, and clearly wants him to get the Grocery Store Joe treatment. They're already campaigning to see him in Paradise, but part of me thinks he seems too pure and kind for that! Bachelor in Paradise is a place where hearts get smashed in a fast-paced game of romantic roulette. Joe did well there by settling down with Kendall right away, but could lightning strike twice in Paradise for Matt, too? Bachelor Nation only has to wait until this summer to find out.