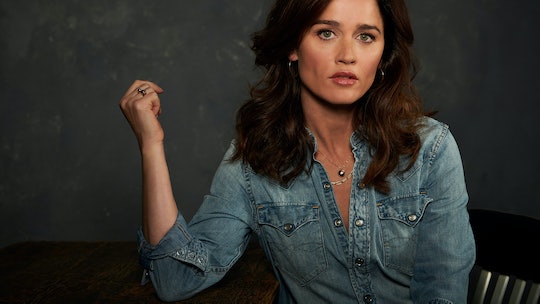 You might remember Marcia Clark as the lead prosecutor of the OJ Simpson murder trial in 1994. Since then, Clark has moved on to write award-winning crime fiction novels. And now she is making her television debut as the executive producer and co-writer of ABC's The Fix, which premieres on Mar. 18. While the trailer for the show reflects a few key similarities from the case, fans can't help but wonder if the lead character, Maya, is based on Marcia Clark in The Fix.

ABC is certainly settling into the legal drama niche. The Fix joins the ranks of How to Get Away with Murder and For the People. However, it's clear that the origin of The Fix is at least inspired by the real events of the OJ Simpson trial. A press release, courtesy of ABC, stated:

From executive producers Elizabeth Craft, Sarah Fain and Marcia Clark, The Fix follows Maya Travis (Robin Tunney), an L.A. district attorney who suffers a devastating defeat after prosecuting an A-list movie star for double murder. With her high-profile career derailed, she flees for a quieter life in rural Washington. Eight years later, when this same star is under suspicion for another murder, Maya is lured back to the DA’s office for another chance at justice.

While you might pull a few similarities between Maya and Clark, The Fix creator claims that Maya is purely fiction.

“Though Maya Travis and I share an ‘origin story’ and a devotion to justice, she really isn’t me," Clark said in an interview with TV Insider. "I’m sorry, but you won’t learn anything new about me personally. The Fix is a totally fictional imagining of what might happen if the killer who got away with murder the first time winds up charged with murder again — and the prosecutor who lost the first trial comes back to try and bring him to justice this time.”

Clark also used her past experiences while taking on the challenge of writing the ABC drama.

"I wanted to write The Fix because it really does wrap in all my life experience," Clark told E! News. "I lived through a high-profile media circus. It tells the story of what goes on beyond the TV cameras."

As reported by the New York Post, Clark wasn't involved with FX's The People v. O. J. Simpson: American Crime Story, where Sarah Paulsen portrayed Clark. However, not only did Clark tell what she needed to say in The Fix, she has also been heavily involved in every aspect of the show since the very beginning.

“I love every part of writing and producing," Clark revealed to TV Insider. “Creating the characters, the stories, getting to work with fabulous show runners and co-creators Liz Craft and Sarah Fain and our incredible writing staff... It’s the gift of a lifetime. There is no such thing as a typical day. Every day is filled with... everything. Breaking stories in the writer’s room, casting, writing, going to the set — the days are packed from morning to night. And I love it all!”

That being said, Robin Tunney, who plays Maya on The Fix, revealed that Clark let Tunney take the reigns when it came to her portrayal of the character.

“She never coached me on how to deliver anything,” Tunney told the New York Post. "I think Marcia wants to keep her hands in her own rice bowl.”

While Maya may not be based on Clark, the similarities between the two women may be compelling enough to draw in viewers who are piqued by the real-life inspiration.