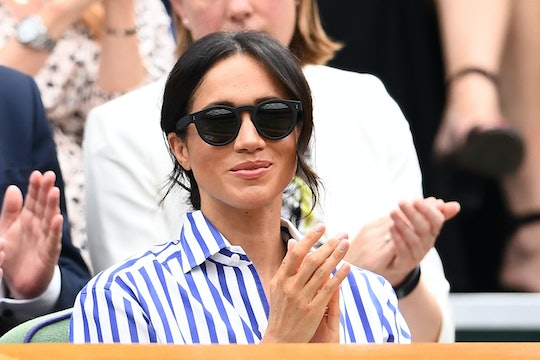 Is Meghan Markle A U.S. Citizen? The New Duchess Is Still Her Own Person

Any royal watchers out there have definitely taken notice of the changes in American actress Meghan Markle since she became the Duchess of Sussex when she married Prince Harry. Her wardrobe game has changed significantly, and obviously everyone has an opinion on that one (I, for one, am all for it, although I do miss her ripped jeans). There's that not-so-subtle hint of a British accent these days. In essence, some people might be wondering if being a member of the British monarchy has taken all the American right out of her. I mean, is Meghan Markle even a U.S. citizen anymore? Does she want to stay a U.S. citizen or just completely assimilate to life at the palace?

After all, she's in a pretty unique situation here. One that has never been an issue for a modern-day member of the royal family. Markle was born in California, and had a huge life on this side of the pond before marrying Prince Harry in May. She was an actress on Suits, a well-respected philanthropist, had dozens of super famous celebrity friends (cough, cough Serena Williams), a lifestyle blog... in other words, she was sort of the American dream before she became a bona fide duchess.

Is she ready to say goodbye to her old life in favor of her new, and clearly pretty spectacular, life? Her hair has been much shinier since becoming a duchess, after all.

According to royal expert James Brookes, who is the director of broadcasting and communications at the Royal Central website, Markle might not be willing to give up her status as an American citizen. As Brookes explained to The Daily Express, there could be a very important reason why Markle would want to keep her U.S. citizenship:

As it stands, and as far as we’re aware, Meghan’s still a US citizen although she’s going through the process of becoming a UK citizen. As such, if she chooses to keep her US credentials and she and Harry have children, the children will be eligible for US citizenship too.

It's difficult to imagine Markle giving up her American citizenship to become fully British, especially after she has quietly but firmly stood her ground as an independent woman on several different occasions. At her wedding on May 19, Markle not only made a point of changing a few antiquated royal traditions, like the flavor of the wedding cake and adding her own favorite flowers to her bouquet, she also walked herself most of the way down the aisle at St. George's Chapel in Windsor Castle. And she honored her own American history by inviting U.S. pastor Michael Curry to deliver a powerful sermon at her ceremony. When she and Prince Harry exited the church, a choir sang "This Little Light Of Mine" by Etta James, a U.S. civil rights anthem. And all of this was reportedly done with the loving full support of her husband, a man who wants to honor her heritage as well.

Sure, Meghan Markle is reportedly in the process of becoming a citizen of the United Kingdom. And yes, maybe she has affected a slight British accent recently. But she is also supposedly planning an unofficial trip stateside to visit family and friends in the coming months. To spend time with her mother, maybe doing yoga together or something. To reconnect with her roots. To possibly remind herself of the woman she still gets to be, even if she did marry into the royal family.

I could be wrong, but I don't see Meghan Markle giving up her U.S. citizenship any time soon. She's just too much her own person for that.