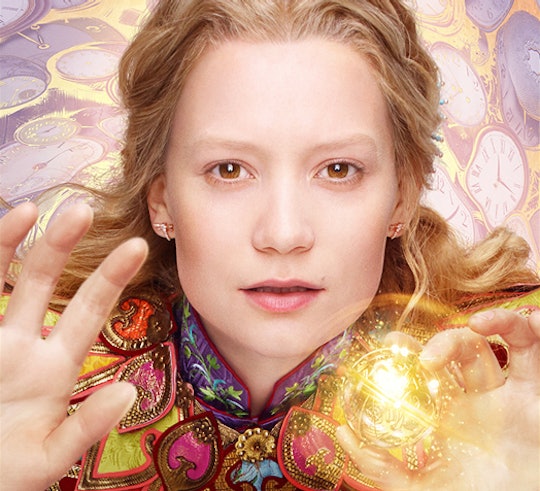 Is Mia Wasikowska Makeup-Free In 'Alice Through The Looking Glass'? Her Look Is Striking

In a movie full of technicolor backdrops, CGI costars, and bulbous heads stretched to unnatural proportions, the most striking look is the one actor who actually looks like a human being. But is Mia Wasikowska makeup-free in Alice Through The Looking Glass? Not quite. She just seems that way when compared to her overpainted costars. Look closely and you'll see some blush, a dab of lip color, and some concealer and/or foundation. In an age of high-definition TV, where even actors playing a character with the flu still sport false eyelashes, a minimalist look stands out. Urban Decay even has a new palette inspired by the film.

One consistent complaint about the movie adaptations of Alice's Adventures in Wonderland is that they focus too much on her extraordinary friends, leaving the title character in the background. Perhaps the best way to make her stand out, then, is to play up the one thing that makes her unique: she's normal. She's human. And in a world of talking caterpillars and Time personified, that actually makes her pretty special. Bizarre caricatures are a dime a dozen in Wonderland; there, Alice is the interesting one.

But what about in our world? I may not wear makeup to a friend's house or the grocery store, but I'll be damned if someone's taking a picture of me without a smoky eye. I have the same blonde eyebrows as Wasikowska, but you'd never know it; whenever someone asks me what three items I'd bring to a desert island, I always name eyebrow pencil, and really, I'm only half-joking. What's happened to us? Have we all forgotten what a regular human face looks like? Seeing an actress who dares to be onscreen with eyelids the same color as the rest of her face shouldn't be so surprising, but it is.

Maybe this is why tens of thousands of teens are getting plastic surgery nowadays. Maybe this is why Kylie Jenner, whose been raised to trade on her looks, got lip injections before she got a high school diploma (which is totally her prerogative). These days, it's actually notable when a woman doesn't strive to look like a living, breathing Bratz doll. And agreeing to have your practically-bare face projected onto a 30-foot-tall screen is pretty bad*ss. It's certainly not something I'd ever do (my pores are a decade older than Wasikowska's; sue me), but I applaud it.