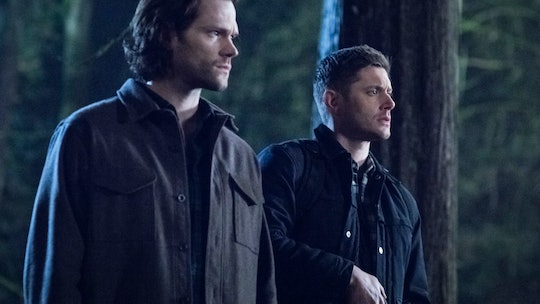 I Desperately Need To Know If Michael Is Dead On 'Supernatural'

Ding-dong the big bad is dead — or is he? After a month-long hiatus, Supernatural returned to The CW with a new episode titled "Ouroboros." Naturally, things got a little bit dicey, and in a turn of events, Jack killed Michael. Or as Castiel put it, "his head exploded like a ripe melon in the sun." But is Michael really dead on Supernatural? Fans are questioning if the character will make his return in time for the Season 14 finale and have come up with a theory that suggests Michael might still be alive.

If you were disappointed by the way Michael died on Supernatural, you're not alone. Reddit user genkaus thinks that while Michael's death could be making room for a new big bad, this resolution to the character's season-and-a-half arc feels incomplete. The fan listed a number of reasons why Michael's end midseason "simply doesn't work."

For one, the writers poised Michael to become the main villain of Season 14 when Season 13 wrapped and Lucifer was confirmed dead after the explosive finale. “Michael is, for all intents and purposes, the big bad of the season,” Supernatural executive producer, Andrew Dabb, told Variety in October 2018. "He’s going to throw some levers that are going to awaken some bigger, scarier things, but it’s all a part of his design, so he’s the mastermind behind [it].”

Given the buildup, genkaus can't see why Michael would do away with him "like a 2-bit vampire."

The Reddit user also questioned why Michael would abandon Dean when Michael fought hard to get his true vessel back as well as why Rowena would say yes to becoming Michael's vessel in the first place. The fan then continued to dispel the possibility of Michael's death by pointing out that Supernatural has already shown that transplanting archangel grace doesn't work, citing Gabriel's deterioration earlier in the series. So how exactly did Jack absorb Michael's grace to regain power?

The Redditor then referenced the chicken and snake story that Noah told earlier in the episode and explained that what really happened is exactly the opposite of what viewers would expect. "It tells the story after 'seeing' Jack's fate and says he doesn't know whether Jack is the chicken or the snake," genkaus wrote. "On the face of it, it seems that Jack is the chicken, sacrificing his egg (soul) to kill the snake he hates (Michael). But an alternative interpretation is that Michael is the chicken, sacrificing egg he loves (power/grace) to kill the snake (Jack) he hates."

The fan theorizes that Michael chose to be absorbed by Jack and that this was his plan all along. But why?

The Reddit user explains that ultimately, Michael wants to travel through universes until he catches up with Chuck. However, simply using archangel grace to do so would leave him weakened. So, Michael's next best bet was to use Jack, who is an Arch-Nephilim, an archangel-human hybrid. Therefore, Michael would be powerful enough to hop universes at full power.

As fans saw throughout his time on the show, Michael has been possessing creatures and humans. The Redditor pointed out that Michael was able to control Garth's mind and moved on to humans, as Michael left a piece inside of Dean and eventually found a way to fully control the Winchester brother. Now, Michael is equipped with all the information he needs to take control of an Arch-Nephilim.

"Michael knew from Dean's mind that Jack was now capable of using his soul for power — and he knew that if Jack is pushed into a corner, he'd use this power to fight back," genkaus wrote. "But Jack might be hesitant to fight back against 'Dean' — so Michael had to use a different vessel here. With that Michael can stage a fight where he gets 'defeated' and Jack absorbs his power — which is what Michael wanted all along. Since Jack burned off a big part of his soul in this fight, Michael would now have an easier time corrupting and possessing him from the inside out."

So to summarize genkaus' theory, Michael isn't dead. Instead, Michael let himself become absorbed by Jack in order to possess him for a biggest — and much badder — endgame.

Whether or not you believe in the plausibility of this fan theory, you should know that there's plenty to come before the Supernatural Season 14 finale airing on Apr. 25. So until then, hold onto your hats. This is going to be a wild ride.