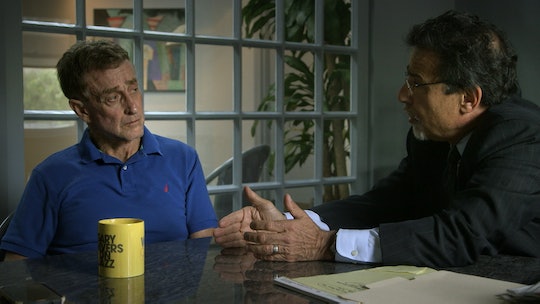 Is Michael Peterson Still In Jail?

Usually when you’re convicted of murder, you’re sentenced to something like life, or close to it, in prison and that’s essentially that. In Michael Peterson’s case, however, that’s not entirely accurate. As viewers will see in the upcoming Netflix docuseries The Staircase, the crime novelist was found guilty of his wife, Kathleen Peterson’s, murder when he reportedly found her at the bottom of the stairs in their home. But more than a decade later, is Michael Peterson still in jail? He did spend close to eight years incarcerated, but in 2011 he was released and in 2017 he underwent a new hearing in which he entered an Alford plea.

For those who aren't well-versed in legal jargon (or who had to Google what that means, like I did), it's basically a plea that admits how damning all of the presented evidence looks. It doesn’t declare that the defendant acknowledges their own guilt in the crime, but it does offer the next best thing. As a result, the judge released Peterson from prison, given the fact that he’d already served so much time, and since then, he’s been living in Durham, North Carolina.

The trial itself is easily something comparable to any other high profile true crime story. While Peterson and his wife weren't famous by any means, they did live in a mansion and were reasonably wealthy and successful enough to have lived well-off. But what drew so much media attention to the trial was easily all of the secrets and details about their life and Peterson’s life before his marriage that came out during the course of the case.

One of the main pieces of evidence that the prosecution had for Peterson’s possible motive in the crime was the $1.4 million life insurance policy that he stood to gain in the event of his wife’s death. It was later revealed that her daughter with her previous husband and her first husband were awarded the settlement as opposed to Peterson himself, but there were also plenty of other pieces of evidence brought up in court to paint Peterson in a seemingly negative light.

It was also revealed during the trial that Peterson was allegedly a closeted bisexual, but his attorneys argued that his wife knew about it and that they had an arrangement that kept them both in a happy marriage. Regardless, it was yet another bombshell in a trial that continued to point to Peterson's untrustworthy characteristics, including claims that he’d possibly lied about medals he’d been awarded while serving in the Vietnam War.

In 2003, a jury found Peterson guilty of murdering his wife. Of course years later he would be released, but in 2009 a new theory about her death was brought to light which brought more intrigue and curiosity to the case that had seemed like it was closed years prior. Local attorney T. Lawrence Pollard, who was a neighbor to Peterson and his wife but who did not work on the case, theorized that an owl had attacked Peterson’s wife and caused her to fall down the stairs, as a microscopic feather had been found at the scene.

Dr. Deborah Radisch, the physician who performed the autopsy, insisted that the injuries were not consistent with what an owl could have done, but another medical expert, Dr. Alan van Norman, disagreed. In an affidavit he filed in 2010, van Norman wrote, "The multiple wounds present suggest to me that an owl and Ms. Peterson somehow became entangled. Perhaps the owl got tangled in her hair or perhaps she grabbed the owl's foot."

Unfortunately for Peterson, nothing came of the famed owl theory, but it was his own would-be admission via his Alford plea which gained him his freedom in 2017, as reported by Bustle. Still, it was one of the more fascinating trials in recent years and despite Peterson's initial sentencing, he is currently a free man.