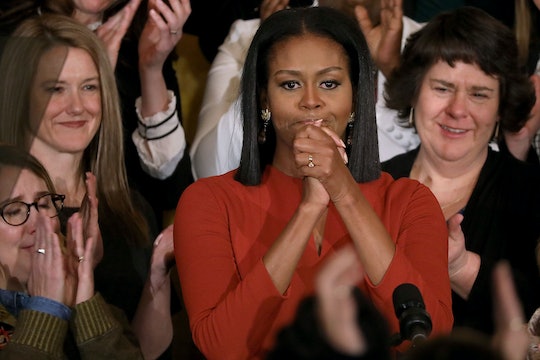 Tuesday proved to be an emotional night for America, perhaps even more emotional than some of us expected it to be. President Barack Obama gave his final farewell, and it was a moving, thoughtful, rousing tribute to the sort of president he has been for the past eight years. And naturally, the people wanted to know if Michelle Obama was at the farewell address. Because just as President Obama has moved us with his words, the first lady has been an beloved and international favorite from the outset.

Mrs. Obama was front row and center, as she has been at hundreds of events to support not only her husband, but her fellow Americans, since the early days of the Obama Administration. She was with her daughter Malia, who had tears streaming down her face as President Obama delivered his last formal address to the country. He addressed his "wife of 25 years and best friend" personally in what was arguably the most emotional moment of his speech, speaking directly to her and saying:

You took on a role you didn’t ask for and made it your own with grace and grit and style and good humor. You made the White House a place that belongs to everybody. And a new generation sets its sights higher because it has you as a role model. You’ve made me proud. You’ve made the country proud.

Mrs. Obama was a quiet presence at her husband's final address. And yet. Just as millions of people mourned the end of eight years under President Obama, so too did we mourn the end of first lady Michelle Obama's time in the White House. She has been an advocate for the rights of girls and women, championing and developing the Let Girls Learn initiative to encourage education in adolescent women. She has worked towards ending childhood obesity through Let's Move!, made charity work a priority in her life... and when it came time for Mrs. Obama to deliver her own farewell address, it was just as touching, thoughtful, and heartfelt as her husband's.

The Obamas will most certainly be missed individually, but it will also be their presence as a supportive, intelligent, driven couple that has made them so compelling to observe for the past eight years.

They will obviously move on to do other great works, they will continue to serve the American people with their own inimitable grace and wit, but soon enough, they will no longer serve from the White House. In her final address, Mrs. Obama said it had been "the greatest honor of her life" to serve as first lady of the United States.

Just as it has been a great honor to be a part of the Obamas' lives for eight years.

They will be missed.