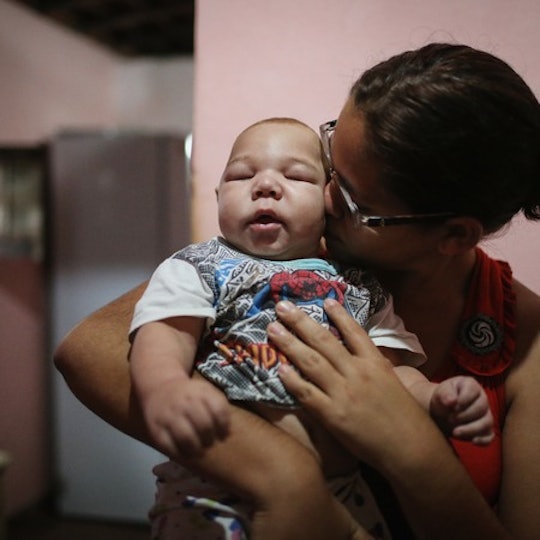 Is Microcephaly Fatal? It Can Be A Lifelong Battle

While there is still so much to learn about this recent outbreak of the Zika virus, the confirmed link between the Zika virus and microcephaly in infants has been causing some understandable panic in new parents. Since the Centers for Disease Control first confirmed Zika cases in the United States earlier this year, concerned parents have been trying to get as much information as possible to protect their little ones. But is microcephaly fatal?

The good news is, microcephaly is not fatal. According to the CDC website, microcephaly is a condition where a baby's head does not develop properly during gestation. This causes the baby’s head to be much smaller than normal. During pregnancy, a baby’s head grows because the baby’s brain grows. Microcephaly can occur because a baby’s brain has not developed properly during pregnancy or has stopped growing after birth, which results in a smaller head size. Microcephaly can be an isolated condition, meaning that it can occur with no other major birth defects, or it can occur in combination with other major birth defects.

While microcephaly is, unfortunately, a lifelong condition with no known cure at this stage, it is not generally fatal. Babies suffering from microcephaly might not have any other physical concerns related to their condition, depending on the severity of the case. Children born with severe microcephaly (when a child's head is much smaller than expected), however, could very well experience some life-altering side effects.

According to the CDC, children suffering from microcephaly may experience:

In the United States, microcephaly is still considered an incredibly rare condition. Just nine pregnant women in the United States have reportedly become infected with the Zika virus, and only one woman gave birth to a child with microcephaly. In Brazil, however, the numbers of Zika-related cases of microcephaly have tipped the scale at an alarming 4,908 children born with the condition since the outbreak began to occur.

There are a few other causes of microcephaly occurring in utero, according to the CDC:

Children who suffer from a sever case of microcephaly will benefit from early intervention. While the condition is lifelong, help with speech and physical therapy should help diminish the difficulties somewhat.

Remember, if you are pregnant and concerned about becoming infected with the Zika virus, it's important to take precautions in order to prevent any potential microcephaly complications — and keep hoping for a cure in the near future.