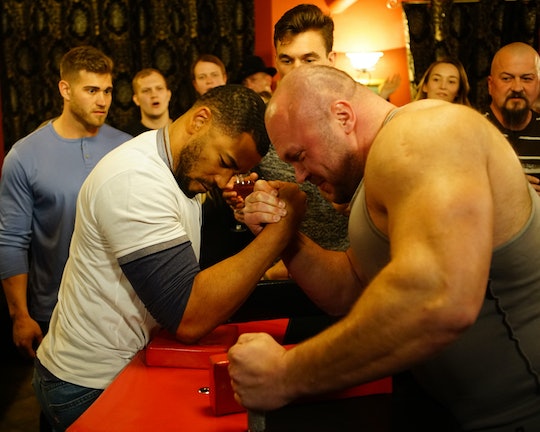 Does Mike Johnson Find Love On 'Bachelor In Paradise'?

Hannah Brown's reign as The Bachelorette may be over, but long before the final rose, a fan favorite was eliminated. Mike Johnson won the hearts of many, including Demi Lovato, but didn't find his forever love on the show. Now that his time as a contestant is over, many are wondering if Mike is dating someone or if he's holding out for a spot as the next Bachelor. With an upcoming appearance on Bachelor in Paradise, Mike may have more secrets than Jed Wyatt (not really).

As of now, it's hard to say if Mike is dating anyone exclusively or not. Recently, fans were shook to learn the potential Bachelor would appear on Bachelor in Paradise, because that could potentially impede his chances of becoming the next lead of the show. Then again, it worked for Colton. As shown in an early BiP promo, Mike is seen alongside Caelynn Miller-Keyes walking down a set of stairs. Could these two be the next Bachelor in Paradise power couple?

Honestly, anything goes in Bachelor Nation and it's next to impossible to predict. For example, who would have called Krystal Nielson and Chris Randone falling in love? Still other Bachelor alums have found love outside of Bachelor Nation but not outside the public eye. Wells Adams, for example, is now engaged to Modern Family actress Sarah Hyland (they are adorable).

And it turns out Mike also has a pretty high-profile fan club — specifically in Demi Lovato, who has been extremely vocal about her crush on him on her social media. Lovato has been shooting her shot all over her Twitter and Instagram and it is seriously relatable. With Mike's endearing smile and ability to calmly call out immature behavior from the other guys, who can blame Lovato for blasting the bat signal?

Despite the online chemistry between Lovato and Mike, there is no conclusive evidence the two have ever gone on a date. Mike's Instagram page suggests he's living life to the fullest post-Bachelorette, spending time with friends, taking photos with adorable pups, and flashing that trademark smile. He seems to be very single at the moment, soaking up all the opportunities that come with being a franchise fan favorite, and who can blame him?

But now that some time has passed since his elimination, he has Hannah's blessing to become the next Bachelor as well as Chris Harrison's vote — not to mention all the fans rooting for him.

Mike said he was flattered to be on the shortlist for the Bachelor spot when speaking to People, but worried he'd get contestants that wouldn't take the process as seriously as him. That says all you need to know about him (the fact that he adores his mom and grandma isn't a bad sell either).

I can't tell you if Mike is dating someone, exclusively or not. If he is, he's keeping it all very quiet for now. Maybe the time isn't right, or he hasn't found "the one." Or maybe (hopefully) it's because he's gearing up for his season of The Bachelor. As a massive Mike fan, nothing could be sweeter.

Bachelor in Paradise airs Monday and Tuesdays at 8 p.m. ET on ABC.