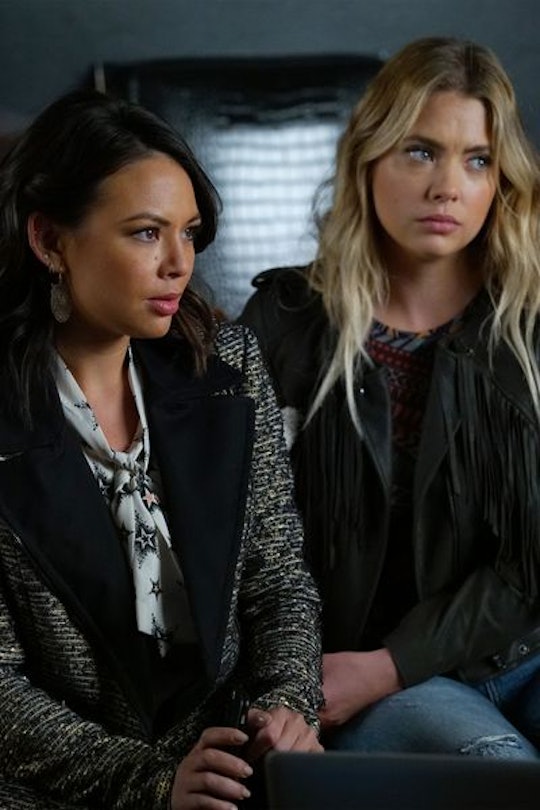 Mona's Suspicious Actions Could Still Be Explained On 'PLL'

As Pretty Little Liars series draws to a close, it looks like fans are finally getting the answers they deserve. During last Tuesday's episode, Mona was seen in her apartment and it looked a lot like she'd turned it into a lair of some sort. So is Mona working for A.D. on Pretty Little Liars or is she up to her own schemes? Knowing Mona, she's got her own plan in the works.

Things definitely looked suspicious at the end of "Driving Miss Crazy." From the way Mona basically pushed Emily away from her apartment door to the fact that she had the shovels the Liars used to bury Archer's body, it's clear something's up. However, that doesn't necessarily mean Mona's gone to the dark side. Or, at least, not A.D.'s dark side.

Janel Parrish, who plays Mona, explained in an interview with Entertainment Tonight that Mona's the type who "needs to see everything up." In other words, though her apartment may have looked like a lair, it was probably just Mona's way of seeing the big picture, which will hopefully help her figure out who A.D. really is. When asked if Mona really is up to any "shady business" Parrish simply said: "Maybe. I think she's just trying to play the game." Which sounds about right.

Hanna did ask Mona to help her figure out how to win the game and find A.D. It certainly seems plausible that Mona's actually going to keep her word and do what Hanna asked her to do. However, as Mona warned Hanna, getting into this board game is a slippery slope and could make Mona resort to some of her old behaviors. She was "A" before and she loves being manipulative and playing with people. It's also possible Mona has now become addicted to figuring out the game and who A.D. is, hence her quasi-lair.

Still, even if that's the case, that doesn't mean Mona's working for A.D. In fact, it definitely seems like Mona's trying to work against them and if anyone can actually outsmart this person it would be Mona. She's the cleverest one out of all the Liars and as someone who used to be "A," she certainly knows how to get into this person's mindset. Hanna has every right to be confident in Mona's skills, the only real question is will she, and the rest of the Liars, be able to trust Mona if they discover her lair? Fans will just have to wait and see.