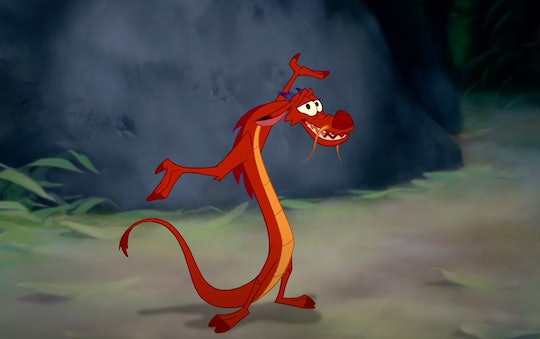 Where Oh Where Is Mushu In The New 'Mulan' On Disney+?

Any '90s kids will remember Eddie Murphy as the hilarious voice behind Mushu, Mulan's trusty and spunky sidekick in the 1998 classic animated Disney film. It's been more than two decades since the original Mulan hit theaters, and now 2020's live-action version is officially on Disney+, but you may quickly notice that Mushu is not in the new Mulan.

In the original Mulan, as Disney fans likely recall, the tiny dragon, who was sent by Mulan's ancestors to guide her home safely, spends much of the film giving Mulan advice and making wisecracks. Who could forget when Mushu introduced himself to Mulan with this iconic line? "Who am I? Who am I? I am the guardian of lost souls! I am the powerful, the pleasurable, the indestructible Mushu! Oh. Ha, ha. Pretty hot, huh?"

In the new, live-action and PG-13 rated Mulan, which is available now to stream on Disney+ for an additional fee of $29.99, Mushu is not a cast member. Why? The film's director, Niki Caro, told USA Today that while Mushu served a great purpose in the animated film, the miniature dragon just couldn't fit in the remake.

"We were very inspired by what Mushu brought to the animation, which was the humor and levity," Caro explained to USA Today. "And the challenge was to bring that to Mulan's real relationships with her fellow soldiers. Mushu, beloved as that character is in the animation, was Mulan's confidant. And part of bringing it into live action is to commit to the realism of her journey. And she had to make those real relationships with her fellow soldiers."

Mushu's absence isn't the only change between the animated film and live-action version. In 2020's Mulan, there is a new villain, lack of love interest, and no singing in the remake, according to Collider. Most notably, the animated film was rated G, while the new film is rated PG-13, due to the increase in action-packed battle sequences and use of weapons.

Although the highly anticipated remake doesn't have a wisecracking dragon, it does feature the beloved "matchmaker scene" and of course, Mulan fights gender stereotypes while bringing honor to her family.

You can see how Mulan's relationship with her fellow soldiers makes up for Mushu's absence now that Mulan is available on Disney+. For now, you will have to purchase the movie to watch it ASAP or you can wait until December and watch it for free.